The official 2020 Coachella Valley Music and Arts Festival lineup has just been released! And it’s already created a huge buzz on the internet.

Come April, some up-and-coming names and some familiar faces will be making their way to Indio, California, for the 21st edition of the celebrated genre-spanning music festival. 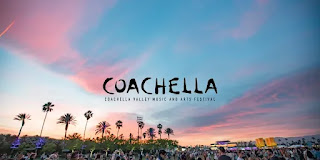 Coachella drops one of, if not the, biggest and baddest lineup for a festival every year and 2020’s phenomenal set-list is finally revealed.
Coachella 2020 has dropped it’s lineup and the first weekend has sold out within hours. The festival is famous for having a blow-away lineup with hundreds of artists from all over the world. Their lineup is so massive that they put on 2 separate weekends of the same acts, back to back.

This year people are ecstatic for many reasons. A big one being that Frank Ocean will be headlining the Sunday night. The beloved R&B singer is renowned for performing live so rarely that he’s been the source of major rumours for hosts of festivals. His infamously unattainable performances even led to Drake ending a set early from boos last year. Coachella finally managed to nab him.

Also headlining the weekend is rap-star Travis Scott and the return of fastidiously political rockers Rage Against the Machine. Of course beyond the weekends 3 headliners there are hundreds of incredible acts including famed composer Danny Elfman and international superstar producer Calvin Harris.

The Comeback Kids
Some much-loved artistes who have been a bit inactive recently will be making a comeback at Coachella 2020 and we’re really excited to see them perform! Here’s five of the performers that we’re genuinely happy to see playing again:

1. BIGBANG: The South Korean K-pop idols are making their long-awaited return to performing this year, and they will also be the first male K-pop band to ever play at the Coachella festival. The band was previously on a hiatus since its members had to enlist in the South Korean military and due to Seungri’s departure from the group last year due to the Burning Sun scandal.

2. Rage Against The Machine: The infamously political and outspoken rap-metal group will be reuniting for a performance at Coachella 2020. We already knew they were going to be headliners, but to get a chance to bounce along with Zach de la Rocha as he shrieks “F**k you, I won’t do what you tell me” will finally be a dream come true for thousands of fans.

3. Frank Ocean: The elusive, mysterious R&B artiste was the reason why Drake was booed at the Camp Flog Gnaw Carnival last year. The over-eager fans at Tyler, the Creator’s 2019 festival had been expecting to see a certain Ocean perform instead of an unwelcome Drizzy. So when Frank Ocean ended his long Coachella absence (he last played there in 2012), fans were over the moon to see his name on the confirmed headliners’ list.

4. MIKA: We haven’t seen or heard too much from the uber-talented ‘Grace Kelly’ singer MIKA in recent years. Although he did quietly release his fifth album ‘My Name Is Michael Holbrook’ a few months ago, he has mostly been doing his low-key thing on the down-low, like mostly performing at concerts in Europe, or endorsing Pilot Pens. The gilt-voiced Lebanese-English artiste was a surprise but welcome addition to the official Coachella lineup.

5. Fat Boy Slim: Who could ever forget about your cool uncle’s favorite DJ? Or that music video where Christopher Walken danced better than your uncle ever could at last year’s Christmas party? Norman Cook aka DJ Fatboy Slim last played at Coachella six years ago, in 2014. He’s been under the radar ever since then, so it’s great to see that a bonafide legend of electronic music will once again be playing his stomping sets at a venue befitting of his massive stature.

This year’s esteemed headliners will be Rage Against the Machine, Travis Scott, and Frank Ocean.  While all three acts were either confirmed or rumored to be a part of Coachella, the festival will mark the first time since 2011 of RATM playing together.

The political rap-rock band is scheduled to perform both weekends of the festival, as are Scott and Ocean.

Also taking the Coachella stages this year will be Calvin Harris, Lana Del Rey, Thom Yorke, Megan Thee Stallion, FKA twigs, Lewis Capaldi, Charli XCX, Lil Nas X and many others.  You can check out the complete roster of performers at the Coachella website.

Coachella trolled fans in the hours leading up to the lineup announcement by retweeting years’ old comments begging for certain performers, such as one fan’s 2015 request to bring back FKA twigs.  “Sorry just seeing this,” The festival casually remarked just an hour before officially revealing the 2020 lineup.

The account teased other acts, such as Fatboy Slim, Caribou, Denzel Curry, and Charlie Chu, by retweeting three to 12-year-old Coachella-related threads.

The coldest Thanksgiving canceled all flights in USA