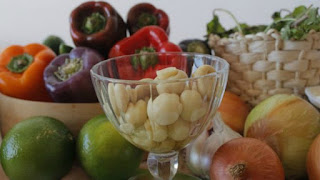 The food, as we do not tire to expose, is one of the aspects to be more caring pregnant. Moreover, it is recommended that you opt for the so-called Mediterranean diet, as it brings with it a long list of benefits. And these just added one more that has now been discovered by a new study.

The Institute of Global Health of Barcelona (IS Global), which is promoted by the La Caxias Foundation, is the one in charge of coordinating this study that has now become known, after its publication in “The Journal of Pediatrics”.

A total of 2,700 pregnant women, from corners of Spain such as Guipuzcoa, Valencia, Asturias or Sabadell, are those who participated in this research. Specifically, they collaborated by filling out a questionnaire about their food consumption during the first and third quarters.

In addition, we have also proceeded to study the evolution and growth of their children from birth to 4 years of age. And the aim of this work was to know the relationship between the feeding of women during pregnancy and growth as well as the cardio metabolic risk of their children during what is called early childhood.

The main conclusion about the Mediterranean diet

Once analyzed and thoroughly studied the data obtained during all that time, an important conclusion has been reached. In particular, a huge advantage has been discovered regarding the fact that the pregnant woman bets on the Mediterranean diet.

Exactly the result that has been obtained is that this diet contributes enormously to reduce the risks that the children of pregnant women who take it suffer what is known as a trajectory of accelerated growth. That is, the chances of them being born with a high weight and of rapidly increasing their weight during childhood are diminished.

The study has come to indicate that, in particular, there is a 32% less risk of having to face this situation.  Also, another interesting aspect about this study is that it can be discovered that the women who least bet on the so-called Mediterranean diet were the youngest, those who had a lower socio-educational level and those who were more likely to smoke.

Although this has been the main advantage that has been highlighted in the Mediterranean diet in pregnancy through this study, we cannot ignore others already known. We are referring to some such as the following:

In the same way, it is a diet that will help reduce the risks that women during pregnancy may have problems with their blood pressure or with cholesterol. Hence, it plays an essential role to avoid that you may have to face the complications related to the aforementioned factors, such as preeclampsia, for example.

It is considered that the Mediterranean diet taken in pregnancy helps to prevent the child suffering from some type of allergy or even asthma once it is born.

It is also really important that this diet that we are dealing with helps a lot so that the woman can cope with the most common and annoying symptoms that are usually experienced during pregnancy. We are referring to vomiting, nausea, irritability, low mood and even stress.

All these reasons more than enough to bet on the Mediterranean diet, which is based, above all, on foods such as olive oil, fruits, vegetables, cereals, legumes or nuts.