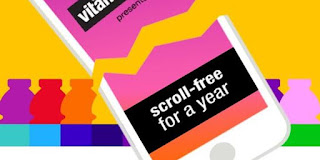 NoPhoneForAYear is called the challenge that has thousands of people competing to be the “chosen” for the experiment to put aside the cell phone.

Nowadays the cell phone is used for many things. Calls have already gone into the background and we even use it as an alarm clock, it is our gateway to the various social networks, we watch movies, we listen to music, etc … The question that arises then is: would you be willing to stop using it?

Possibly most will have answered a resounding “no”, but maybe the thing changes if you find out that Vitamin Water, a brand of Coca-Cola Company, is looking for a person who is willing to spend a year with a team that serves strictly to receive and make calls. The reward? 100 thousand dollars just for you.

The exclusive challenge for US residents is titled #NoPhoneForAYear and already has a lot of people competing to be selected. How would you use the hours you waste immersed in the mobile? VitaminWater wants cell phone addicts to answer this question and promise $ 100,000 in return.

How would you use the hours you waste immersed in the mobile? VitaminWater wants cell phone addicts to answer this question and promise $ 100,000 in return.

The dependence on constant connection and mobile phones is a technological evil on the rise. Aware of the difficulty of a continuous disconnection, VitaminWater’s brand of vitaminized drinks promises $ 100,000 to those who leave their smart device for 365 days. All participants must be over 18 and legal residents of the United States.

At the end of the test, the ‘winner’ must go through a lie detector to confirm his triumph of disconnection. Of course, participants can use old mobile phones throughout the year. And also laptops and desktops, as well as voice-activated devices like Google Home or Amazon Echo. However, all smart mobile devices such as mobiles and tablets are completely discarded, even if they belong to the friends of the participants.

The brand that has raised the challenge belongs to Coca-Cola. Those who wish to obtain the thousands of dollars must share a publication on Twitter or on Instagram explaining what they would do with the time they waste on social networks.

The organizers point out that the applications will be evaluated for originality, brand relevance, humor, and other factors. The official rules of VitaminWater establish that those who use a smartphone for work or other commitments “do not have to apply”.

Despite the difficulty of the challenge, if the contestant fails to reach the end of his disconnection odyssey, he will also receive a prize, since VitaminWater established that those who reach the middle of the crossing (6 months) will receive $ 10,000.

Twitter users splashed the platform with presentations this week, and many hopeful winners promised seriously that they would use the time to bond with the family, learn new languages ​​and improve their relationships.

If I did not have a smartphone for a year I’d be more in touch with myself, my friends and my family. I’d also be able to focus on my goals more or exploring new goals and strengths. You also get a chance to be more original! #nosmartphoneforayear #contest #vitaminwater