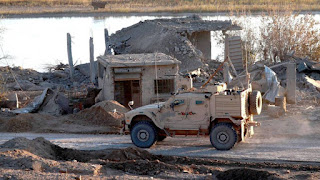 The president considers defeated the ISIS but the withdrawal is considered premature in the Pentagon itself and generates the rejection of Republican hawks.

Donald Trump has decided not to wait any longer and begin the withdrawal of US troops in Syria by defeating the terrorist group calling itself the Islamic State. The withdrawal, which the president promises before reaching the White House, generates misgivings within the Pentagon itself, which fears a terrorist regrowth and greater Iranian influence in the area. After seven and a half million dead, the Syrian civil war is still a powder keg, with multiple fronts open, and a goodbye from Washington leaves several questions.

The one in Syria will be the chronicle of an announced withdrawal, announced ad nauseam by the US president until it finally occurs. The Democrat Barack Obama came to the Oval Office in 2009 with the promise to end the fighting in Afghanistan and Iraq and left without having been able to get rid of both conflicts.

Trump does not want this to be the case. Anonymous sources of the Department of Defense informed Wednesday that the Government is planning the immediate and total withdrawal of the approximately 2,000 soldiers deployed in the territory, a polemic measure in Washington, but that the president himself undertook to confirm implicitly in his Twitter account: “We have defeated ISIS in Syria, the only reason to be there during my presidency,” he wrote.

There is, however, no clear information about the date or progressivity of this withdrawal. White House spokeswoman Sarah Sanders said in a statement that some troops have already begun to return home as part of a “transition to the next phase of this campaign.” Meanwhile, a spokesman for the Pentagon stressed that at the moment the Army continues to work with its partners in the area. “The coalition has liberated the territory in the hands of ISIS, but the campaign against ISIS has not ended,” he said.

The matter had appeared early in the morning in The Wall Street Journal, which saw the withdrawal of troops in northeastern Syria, where, together with the north-central zone, under Kurdish control, most of the US deployment has been concentrated since 2015. Afterwards, Defense sources reported in different media that the decision was already taken or in consideration, although the bombings against the Islamic State would continue.

The difference of nuances and the lack of temporal precision reflects, above all, the division that exists in the Administration. The measure is also criticized by several Republican hawks in Congress, such as Marco Rubio or Lindsey Graham, who called it a “colossal error.” Senior Pentagon officials fear that a withdrawal of troops will help Iran and Russia gain influence in the area and encourage the resurgence of ISIS, since, while the caliphate founded by Abu baker al Baghdadi has been defeated, thousands of jihadists remain in the border desert between Syria and Iraq. In addition, the US withdrawal leaves the Kurdish militias, members of the US Army and Arab militias in danger in this fight through the alliance (Syrian Democratic Forces). Turkey considers these Kurdish groups terrorists.

The internal pulse of Washington was already evident last April. “I want to go out. I want to bring our troops back home, start rebuilding our nation, “Trump said, and said the decision was imminent. The next day, however, the White House said that the US military presence would continue while the “small presence of ISIS” still present in the area was finished.

Today Trump has definitely considered defeating the Islamic State in Syria, but the Pentagon chief himself sees it in a different way. Last September, in statements to the press, he warned that “getting rid of the caliphate does not mean blindly saying ‘OK, we’ve got rid’, leaving and then asking why they’re coming back.”

Regardless of the date or gradualist, Wednesday’s statements show that US troops have a very limited time in Syria, despite the two attacks that Trump has carried out against the regime of Bashar el-Assad, in 2017 and in 2018, in response to alleged chemical attacks against the population. Washington has made it clear that its objective is not to overthrow El Assad, but rather ISIS, and that it wants to pack its bags.