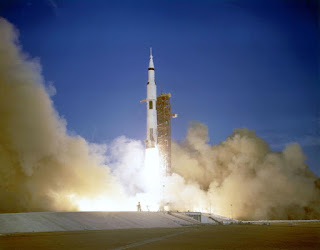 50 years ago, for the first time, three human beings passed the Fiestas out of their world.

Apollo 8 was the second manned mission of the Apollo Space Program of the United States. The mission began on December 21, 1968, and was the first manned mission to leave Earth orbit, reach and orbit the Moon and finally return to Earth.

The Apollo 8 mission NASA had originally been intended as Apollo 9 and its launch is planned for early 1969 as a second test of the Apollo spacecraft, including the Lunar Module (LM) and the command module and service ( CSM) in medium Earth orbit.

One of the most famous aspects of Apollo 8’s mission was the photo of the Earth’s exit that was taken as it passed through its fourth moon orbit. This was the first time that humans had taken a picture like that being behind the camera, and it can be said that it has inspired, in part, the First Earth Day in 1970. The American astronauts took 3 days to reach the Moon. The mission orbited ten times over 20 hours, during which time the crew performed a televised Christmas Eve broadcast in which they read the first ten verses of the Book of Genesis. This transmission was the most seen of the history until then. The crew of Apollo 8 returned to the land on December 27, 1968, when landing in the northern part of the Pacific.
The three NASA astronauts were named Men of the Year in 1968 by Time magazine.

The Apollo 8 mission was a technological triumph, given that it provided all the keys of space navigation to reach the Moon since no one had reached that far until that moment. And also a media hit, as it left behind any Soviet initiative. With Apollo 8 the road to the Moon was definitively opened at Christmas 1968. To concretize the feat in July 1969 with the mythical Apollo 11.

In addition, Apollo 8 (and essentially NASA ) saved the year 1968, which had been chaotic for Americans, since months earlier they had killed Senator Robert Kennedy (brother of President John F., also killed in an attack in 1963) and the famous black pacifist leader Martin Luther King, at the same time as the Vietnam War, began to intensify. But the aerospace mission left all that behind on that Christmas.