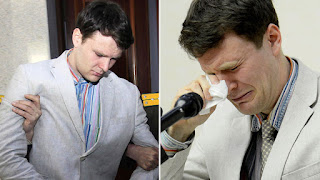 Judge orders North Korea to pay 500 million dollars for the death of a US student. North Korea, sentenced to compensate 500 million to the parents of the young Otto Warmbier for torture.
Otto Warmbier studied at the University of Virginia and was visiting the Asian country with a tourist group when he was arrested and sentenced to 15 years of forced labor in March 2016 on suspicion of stealing a poster with propaganda.

A US federal judge on Monday ordered North Korea to pay more than $ 500 million to the parents of a US student who was imprisoned in that country and died shortly after his release.

Judge Beryl Howell harshly condemned North Korea for the “barbarous mistreatment” it gave Otto Warmbier and agreed with the family that the isolated country should be held responsible for his death last year. Howell ordered payment for damages and to cover the medical expenses, the economic losses and the pain and suffering caused to Fred and Cindy Warmbier, who assure that their son was kept hostage and tortured.

Warmbier studied at the University of Virginia and was visiting the Asian country with a tourist group when he was arrested and sentenced to 15 years of forced labor in March 2016 on suspicion of stealing a poster with propaganda. He died in June 2017, shortly after returning to the United States in a coma and showing apparent signs of the torture he would have received while in custody.

Warmbier’s parents, Fred and Cindy, sued North Korea in April for the death of their son. The 22-year-old was arrested in 2016 for stealing propaganda material from the hotel where he was staying. He has released thanks to the diplomatic efforts of the United States, but with severe brain damage. He died a week after returning. Federal Judge Beryl A. Howell has considered that the Warblers “have experienced in the first person the brutality of North Korea,” which used his son “as a pawn in the global departure of this totalitarian state against the United States.”

An American family, the Warblers, directly suffered the brutality of North Korea when (the Pyongyang regime) arrested their son for use as a pawn in the tricks of this totalitarian state and his confrontation with the United States. United, “said Judge Beryl Howell. It is highly unlikely, however, that North Korea will pay this sum and the plan assets that may be seized in the United States are meager.

In holding Pyongyang accountable, Howell accused the government of using Warmbier as a “pawn in the tricks of that totalitarian state and confronted with the United States.”

“Before Otto traveled with a group on a five-day tour to North Korea, he was a healthy and athletic student of economics and business at the University of Virginia, with big dreams and intelligence skills and as a person who they made an outstanding student “, wrote the judge. “I was blind, deaf and brain dead when North Korea handed him over to the US authorities for his final trip home.”

Warmbier’s parents have issued a statement in which they thank the judge for evidencing that “the regime of Kim (Jong Un) is legally and morally responsible for the death of Otto.” This ruling is “a significant step in our path”, they highlighted. North Korea has denied on several occasions that Warmbier was tortured, but has preferred not to respond to the demand. The compensation could be paid with the North Korean funds that have been blocked in the United States, according to the Treasury Department, quoted by CNN.

The arrest and death of Warmbier came during a time of intense tensions between the United States and North Korea over the North Korean nuclear weapons program. Presidents Donald Trump and Kim Jong UN had a historic meeting in June 2018 and there are plans to hold another meeting next year. Warmbier had been sentenced to 15 years in a forced labor camp during a North Korea trip in early 2016 for alleged theft of a propaganda poster. He went into a coma under unexplained circumstances and was finally released. In June 2017, he died a few days after his return to the United States.

North Korea has denied any ill-treatment of hot beer and said the student had contracted severe food poisoning. Judge Howell pointed out in her judgment, however, that medical tests would have revealed no evidence.

Rather, Warmbier’s neurologist in Ohio came to the conclusion that the student probably suffered severe brain damage due to a minute-long supply of blood to the brain. Howell said it could have been caused by torture methods like electric shocks or waterboarding.