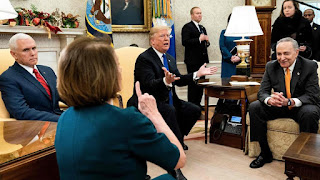 The president again threatens to close the government if they do not give him the money for his wall
The threat of closing the government is a Christmas classic in Washington. Each year, Democrats and Republicans engage in harsh and tedious discussions about the budget that, sometimes, end up with part of the Administration with no funds to function. What has never been seen is a scene like yesterday that was lived in the once solemn oval office, where President Donald Trump received the Democratic leaders in Congress? The meeting concluded with the threat of closing the Government if the White House does not receive the money it asks for to build a wall with Mexico,the same one that, as proclaimed in the campaign, was going to be paid by its neighbors.

It was not planned, but at the last moment, Trump asked the television cameras to enter the meeting. The tough confrontation between the president, the Democratic leader in the Senate, Chuck Schumer, and his head of ranks in the House of Representatives, Nancy Pelosi,for the wall, a foretaste of what is coming next term, came as an unusual political show up the screens and homes of millions of Americans.

“Elections have consequences, President,” the Democrat Schumer slipped maliciously.
“Nancy, we need security at the border. People are coming end masse to our country, terrorists among them, “drug dealers and people with” contagious diseases, “said Trump, who interrupted Pelosi as soon as he gave the floor and raised his voice. “We are here to have a quiet conversation, but I do not think we should talk to the press,” said Pelosi, perplexed by having to negotiate live on television. “It’s called transparency and it’s not bad,” Trump replied.
Aware that the president had locked them in his first visit in 12 months to the oval office, Schumer provoked the president. “The Washington Post has given you a lot of pine needles to distort what the wall will cost,” the Democrat provoked, referring to the result of the lie detector of the Washington newspaper and the fluctuating cost of the project (5,000, 8,000, 12,000 million?). “You want to close the government, we want to reach an agreement and we have solutions to achieve it,” insisted Schumer, who disagrees with the president on its usefulness. ” The wall is effective, Chuck!”, Trump insisted, sitting between the two Democrats, with Vice President Mike Pence behind him, as always silent and motionless like a statue of salt. “We have come here in good faith to negotiate on how to keep the government open,” Pelosi said.
“If I do not get what I want, I’ll close the Government. I am proud to close the Government for security at the border. The honor this time will be mine. I’ll be the one to close it. I’m not going to blame you, “Trump said at the end of an argument that lasted for 17 minutes and in which both sides launched poisoned darts. “The elections have consequences,” Schumer slyly said in reference to the Democratic victory in the House of Representatives in November. “That’s why the country is doing so well,” Trump responded quickly, vindicating his 2016 victory and the Republican triumph in the Senate, and highlighted the “difficult situation” of Pelosi, who still does not have all the necessary Democratic votes to be elected president. Of the House of Representatives in January.
The one who has ignored the proposals to get the 60 votes she needs in the Senate and demands money (5,000 million) that neither Democrats nor many Republicans want to give her. The White House called the discussion yesterday “constructive dialogue”. “This tantrum will not help him get his wall and it will hurt a lot of people,” Schumer said. The trap of Trump to Schumer and Pelosi can turn against him. Part of the political game about the budget and the threats about the partial closure of the government consists of who is perceived as guilty by public opinion. In the absence of agreement, the Democrats provoked it earlier this year, but they had to give in immediately after the Republicans blamed them for the blockade over the immigration debate. In 2013, they were the ones who backed down after Barack Obama held them responsible for the blockade because of their rejection of health reform. Now it’s Trump.