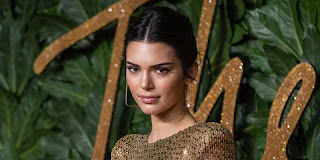 The model stepped on the red carpet of the Fashion Awards 2018 with a revealing model of Julien MacDonald that although it did not leave anyone indifferent, it did not surprise either.
The nude dress is the new Big Mac. Excessive, provocative, indefinable and incomprehensible, but that by dint of seeing it has lost its ability to impress. Today we taste a Big Mac like the one who drinks a cup of tea,forgetting perhaps that it is a double-decker hamburger – it is more, right now it seems to us even small. Well, the same thing happened with the naked dress: amazing and very transgressive (in its day), but thanks to the work of the Kardashians and Hadid it has lost all its ability to impress.
Kendall Jenner was the last queen of reality TV that has worn one of these models in the context of the prizes Fashion Awards 2018: a dress by Julien MacDonald that left little, very little to the imagination. We could define it as a kind of metallic mesh completely transparent and with a lateral opening that showed the impressive body of the model with great detail. Few can take it, and she certainly can.
Jenner arrived,dazzled the media present with one of his usual and sensual poses and then turned around -because if the dress was very revealing at the front, behind it was even more-. More anatomy, more body, more Kardashians.And so, just as she arrived with her naked dress,the model disappeared and left those present with the same aftertaste that you have when you have finished swallowing the aforementioned Big Mac: sated more,but wanting more.
Penelope Cruz, Kendall Jenner, and the Beckham and Gerber-Crawford families were some of the protagonists of the event with their outfits. Kendall Jenner attended the most important meeting of British fashion in London and then went with a friend to a McDonalds.
After seeing this image of Kendall,one cannot help but remember Cher picking up her controversial Oscar for Luna’s Spell dressed in a completely transparent and sequined look that then starred hundreds of items. Maybe going to the Oscars like that, in 1988, was more transgressive than doing it at the 2018 Fashion Awards; you may Cher, Queen Mother clothing the naked, added a touch of crazy and looks over his fantasy, while Kardashian only show over and over again; or maybe Kim and company have abused this garment, while the woman who intoned that if I got you, babe, used it more intelligently.
The fact is that 30 years later,the creation of Bob Mackie is still cited as the great reference when it comes to revealing and excessive dresses. It continues to impress and provoke disparate reactions. It remains, therefore, an iconic dress and representative of a fundamental aesthetic in the history of Hollywood and in the history of fashion. While watching a new nude look from Kendall Jenner, even if you like and surprise, you do it for less time. That, yes: another Big Mac, please.