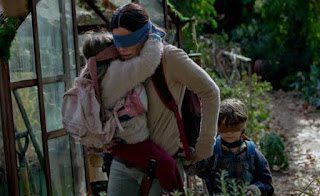 This Netflix production explores the extent to which love for someone leads a person to sacrifice his or her own life. In addition, it gives another meaning to the concept of family.

This Friday the Netflix Bird Box (Blind, in Spanish) premiered, the movie based on the book by Josh Malerman. The film portrays the annihilation of the world population on account of a strange malign presence, which kills anyone who sees it. In the midst of the chaos to survive, the story of Malorie (Sandra Bullock) develops, who finds love and regains hope thanks to Tom (Trevante Rhodes), who to survive with his children must undertake a dangerous journey through a river to get to the only place that can provide protection.

In this post-apocalyptic film the spectators will see a clean interpretation of Sandra Bullock, who has been characterized as the queen of romantic comedies on the big screen, but in this thriller she plays the role of a woman who does not know if she wants to be a mother and circumstances force her to leave apathy aside to fight for the people who become her family.

In “Bird Box”, Sandra Bullock faces a dangerous journey with her children in a post-apocalyptic world, in which everyone who sees the outside commits suicide, which is why to survive, among many other challenges, they must be bandaged eyes.

It is also an original production of the streaming giant, Netflix; over the years he has accustomed us to a certain level in his projects, many of them with millionaire budgets, which brings talented filmmakers and brilliant Hollywood stars. Will this be another case of success?

“Bird Box ” is directed by Susanne Bier. The film is based on the homonymous novel by Josh Malerman. The cast is completed by Sarah Paulson and John Malkovich.

A few hours after the tape was released, “Bird Box ” became a trend in social networks, highlighting the great work of Bullock and the great plot that surrounds the story.

Both Rhodes and Bullock agree that this film explores the extent to which love for someone leads a person to sacrifice his or her own life. And it gives another meaning of being a family: a group of survivors on the edge of the abyss united by the fear of death.

The beginning of the tape shook me from one second to another, with scenes full of blood, collective hysteria, explosions, and despair, it’s like its director, Susanne Bier, takes us into this post-apocalyptic world, which has taken the sanity of a human being and has smashed it to pieces. In principle, dozens of films with the same theme began to come to my mind: I am a legend, World War Z, The Book of Secrets or A Place in Silence, to name a few.

This film joins other Netflix productions, such as Mowgli, by British Andy Serkis, which show that it is possible to have a great cast and an impeccable performance without going through theaters, a phenomenon that takes greater strength thanks to the platforms of streaming and that opens the doors to other types of formats.

Sandra Bullock recognizes El Spectator, who also confesses that her favorite part of making a film is “when a group of people has to figure out how to tell the same story in a different way” and that happens in both film and film productions for the small screen. “I am very happy as a woman in an industry that usually rejects us. I’m still here. I still have opportunities. Just when you think that everything is ending, something like this (Bird Box) happens. And I think Netflix, in its content, with stories like Rome, or with other films it has, will influence people to go to theaters and vice versa. There is enough space for both. “