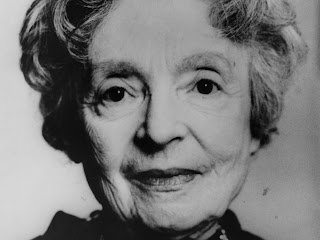 She was the first German woman to win the Nobel Prize for Literature: Nelly Sachs, born 127 years ago today, on December 10, 1891.

She was born in Berlin-Schöneberg, on Winterfeldplatz. In the German capital, she wrote poems after the First World War, published them in Berlin daily newspapers. With the seizure of power by the Nazis in 1933, however, she was only allowed to publish in Jewish media.

Nevertheless, she waited for years with the escape. It was not until 1940 that she boarded a plane to Sweden at the airport in Tempelhof, Berlin. It was then the last scheduled flight to Sweden.

She did not go into exile voluntarily. But she had an early connection to Sweden: she admired the Swedish writer Selma Lagerlöf, wrote her letters. The country became her second home, where she could write, in 1953 she got the Swedish citizenship. In May 1970 she died in Stockholm.

The most important volumes of poetry of the writer are:

• In the apartments of death
• Star dimming
• Eli. A mystery play about the suffering of Israel
• Drive to the dustless
• Divide yourself night

The Nobel Prize she received on her 75th birthday, together with the Israeli Samuel Joseph Agnon. Even though she has been living in Sweden for decades, the author gave her acceptance speech in German.

In 1966, one of the greatest Jewish authors of the twentieth century, Shmuel Yosef Agnon (known by the acronym Shai Agnon), was awarded the Nobel Prize for Literature, which she deserved. But in her typically Scandinavian style, the awards committee had the literary genius share the award with an almost unknown German Jewish poet, Nelly Sachs.

Today, December 10, the corporate giant Google celebrates the 127th anniversary of Sachs (he died in 1970, like Agnon) with one of her extravagant “Google Doodle “(which is when they change the graphics of their corporate logo to reflect something else).

The concept of Google-doodle came to life in 1998, before the plot of world domination was planned. The founders of Google who always ate at the uncool children’s table at high school Larry Page and Sergey Brin fiddled with their new corporate logo to boast of their participation in the Burning Man festival. The two geniuses put behind one of the ‘o’s in Google a drawing with the figure of a stick, telling the world that they were out, doing fashion things. And a new corny concept was born.

By the way, Google-doodle has celebrated the national days of many countries, but guess what country has never reached the first page of the world? Do I need to continue?

Nelly Sachs was the daughter of a wealthy manufacturer and grew up in a fashionable area of ​​Berlin. She studied music and dance and from an early age began to write poetry. After escaping from the Nazis to Sweden in 1940, Sachs spent much of her time translating Swedish poets such as Gunnar Ekelöf, Johannes Edfelt, and Karl Vennberg.

Sachs’s career as a poet began when she was almost fifty years old. Her first volume of poetry, In den Wohnungen des Todes (In the Houses of Death), 1947, ” creates a cosmic framework for the suffering of her time, particularly that of the Jews.”

Although her poems are written in a modern style, with a lot of lucid metaphors, they also into the prophetic language of the Old Testament. The collections Sternverdunkelung (Eclipse of Stars), 1949, Und name Weiss writer (And nobody knows where to go), 1957, and Flucht und Verwandlung (Flight and metamorphosis), 1959, repeat, develop and reinforce the cycle of suffering. The persecution, the exile, and the death that characterize the life of the Jewish people and are transformed, in the powerful metaphorical language of Nelly Sachs, in the terms of the bitter, but not desperate, the destiny of man. Sachs described the metaphors of her poetry as “wounded.”