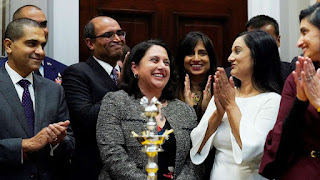 US President Donald Trump announced Tuesday in advance the nomination of the conservative, Neomi Rao, as a replacement for Judge Brett Kavanaugh in the Court of Appeals for the Circuit of the District of Columbia.

A day ahead of an official White House announcement, President Donald Trump on Tuesday revealed his nomination to the powerful DC Circuit Court of Appeals. Rao, who currently serves as Administrator of the Office of Information and Regulatory Affairs, has recently been appointed Supreme Court Justice Brett Kavanaugh.

Trump announced his nomination of Rao, an Indian-American, at a White House ceremony commemorating Diwali, a festival of lights celebrated by millions of Hindus, Sikhs, and Jains around the world. ‘I thought it was an appropriate place,’ he added. So, we’re 24 hours early, but she’s going to be fantastic. Great person. ‘
‘We were going to announce that tomorrow and I said,’ you know, here we are, Neomi, we’re never going to do any better than this right? ‘Trump said.

A report from Politico noted the DC Circuit Court of Appeals is considered as the second highest court in the nation.

“I will say today that I have just nominated Neomi to enter the Court of Appeals, the seat of Judge Brett Kavanaugh. That can be a great story, “said Trump, and followed by a pause full of applause. “We were going to announce that tomorrow and I said ‘here we are’, Neomi. We will never do better than this. I thought it was an appropriate place, even with 24 hours in advance, “confessed the President.

“She’s going to be fantastic, a great person,” Trump said. Subsequently, he offered Rao the right to speak, who thanked the President for the opportunity, saying: “Thank you very much, Mr. President, for the confidence you have shown in me. I appreciate it”.

If confirmed by the Senate, which remains controlled by the Republican Party after the legislative elections, Rao will replace Kavanaugh in the United States Court of Appeals, which handles most important cases by the legality of federal regulations. Rao currently serves as the administrator of the Office of Information and Regulatory Affairs, an agency within the Office of Management and Budget of the White House.

If confirmed by the Senate, which is controlled by Republicans, Rao would replace Kavanaugh in the Court of Appeals for the Circuit of the District of Columbia, which handles the most important cases on the legality of federal regulations. Before working for the administration, she was a law professor at George Mason University in Virginia. She also worked as a clerk of the Supreme Court’s conservative judge, Clarence Thomas.

The Senate confirmed Kavanaugh on November 6 after continuing political fights in which the then-nominee denied accusations of sexual misconduct in the 1980s.

It is the conservative lawyer Neomi Rao who will direct her now. This Court of Appeal rules in the first instance on the decisions of a large number of federal agencies. Ms. Rao is currently Trump’s highest adviser on all regulatory matters. “She’ll be fantastic, she’s a great person,” said President Donald Trump.

Trump announces Kavanaugh’s successor to the Court of Appeal

Donald Trump announced the successor to Judge Brett Kavanaugh in his vacant position at the US Court of Appeals for the District of Columbia Circuit. It is the conservative lawyer Neomi Rao who will direct her now. This Court of Appeal rules in the first instance on the decisions of a large number of federal agencies.

In July of 2017, the Senate voted 54 to 41 to confirm Rao as head of the regulations office, with five Democratic Senators and Independent Senator Angus King, I-Maine, voting in favor of her nomination. Five Senators did not vote.