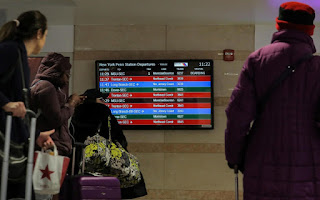 A cold snap affects the north-east of the country. In New York, the winds threaten the traditional Thanksgiving parade.

Rain, snow, blizzard. The Thanksgiving holiday, which begins this Thursday in the United States, will probably be this year the coldest of the century. The entire north-east of the country is falling prey to a cold snap. Historically low temperatures should be recorded, according to the meteorologists of the National Weather Service.
In Philadelphia, it is Thursday -2 °, in New York between -3 ° and -4 ° with winds, in Boston, the -6 ° were exceeded.

According to the National Weather Service, the mercury fell to -5.5 degrees Celsius in New York on November 30, 1871, when the lowest temperature for Thanksgiving was reached. The record in Boston at that time was -7 ° in 1873. Philadelphia had its coldest Thanksgiving in 1901 when the temperature was the same as today.

The sustained winds blowing over New York are threatening part of Macy’s annual Thanksgiving parade. For the moment, at the request of the New York police, the huge balloons of Dragon Ball, Trolls, Ronald Mac Donald and the big golden stars of the famous store are waiting underweighted nets.

Diana Ross, John Legend, Ashley Tisdale, the Bare-naked Ladies, and Rita Ora, as well as 1,500 dancers, Broadway artists, musicians and cheerleaders will have to grit their teeth to keep smiling despite the cold. The departure of this 92nd parade is scheduled for 15 hours on Thursday afternoon (French time, 9 am local time).

Celebrated every year on the last Thursday of November, this tradition is inspired by an agricultural festival organized in 1621 by the first British Christian settlers, the Pilgrims (or “Pilgrims” in English) to thank the Native Americans for allowing them to spend a harsh winter. The following (unfortunate for the natives) we know it … Since then, Thanksgiving and its rituals – the hearty family meal around a roast turkey – are deeply rooted in American society.

At airports, the concern is that of the 50 million Americans who will go more than 80 km to reach their families, more than 30 million will do it by plane, according to the organization Airlines for America. Thanksgiving usually represents the peak of air traffic of the year on the inner lines. The brightest day will be Sunday, with 3.06 million people returning home.

On Wednesday, at least 81 flights were canceled and 1912 late, partly due to weather conditions.

On the roads, for the four days from Thursday to Sunday, the authorities also expect 360,000 repairs of cars and motorcycles. Most of the breakdowns involving oil, battery, and punctures, prevention messages have been spread for several days for drivers to check their vehicle before leaving.

The turkey is a game of considerable size, so cooking can take several hours. A long and especially delicate process that must be well equipped with the right tools. Essential for cooking the famous turkey, a roasting dish is the keystone of a successful Thanksgiving meal. Equipped with a grill, it allows browning the meat homogeneously while allowing to recover the precious meat juice, used for many Thanksgiving recipes. Be careful to use a fat separator to eliminate the fat from your gravy to make it more digestible.