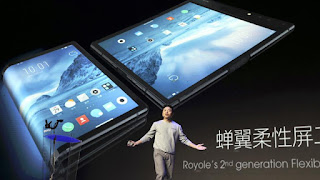 Technology never ceases to amaze us. Each time the companies in the sector put more effort into creating revolutionary devices: mobile phones with up to five rear cameras -like the next Nokia 9- or with screens that reach the edges … but nobody has achieved something that science fiction has accustomed us, flexible screens. Or, rather, nobody had achieved it until now, because a company has already managed to make the first phone with a flexible screen.

And it has not been Samsung, or Apple, or Huawei, or another of the famous brands of mobile devices, but Royole. A Chinese company has developed, according to ubergizmo.com, a phone with its flexible AMOLED technology. In this way, the device, called FlexPai, has become the first ‘smartphone’ in the world with a folding screen in the world.

The device has a 7.8-inch screen, with a resolution of 1920×1440 pixels. So the user can use it as a mobile phone or as a ‘tablet’. In addition, according to the company, the screen can double more than 200,000 times without it suffering any damage. As for what is inside the phone, it works thanks to a processor of the Qualcomm Snapdragon 8 series. The ‘smartphone’ is also equipped with a dual camera with a telephoto lens of 20 megapixels and a wide-angle sensor of 16.

The dream of flexible mobiles is already a reality. Going ahead to Samsung and Huawei, which also pursue the same goal, the unknown Chinese firm Royole has presented FlexPai Thursday, a folding screen device that allows you to open like a book to stretch up to 7.8 inches, a size close to the tablet format.

This first phone will officially arrive in December to the North American market. One of the most interesting challenges that technology brands have faced has been to successfully achieve a system to bend the touch panels of smartphones without losing functionalities.

A few years ago it was unusual for a mobile device to exceed 5 inches. One of the recent solutions has been to reduce as much as possible the frames and edges of them, thus extending the touch surface while retaining a more compact size. According to its designers, it can double more than 200,000 times before breaking.

With this design, the new Chinese brand has advanced to one of the biggest brands such as Samsung, which presented for the first time in 2008 a prototype of the flexible phone, and which is expected to be publicly presented next week.

According to Royole founder and CEO Bill Liu, “FlexPai’s flexible ‘smartphone’ provides users with a revolutionary and different experience compared to traditional mobiles.” Liu also pointed out that the device created by his company “solves the contradiction of a large high definition screen and portability”.

The device executes what the company calls Water OS, a highly modified version of Android 9 Pie. This allows the user interface to work well with the folding screen. For those interested, although the product is not yet on sale – it is expected to go on the market in next December -, you can already book. The FlexPai price will be $ 1,320.