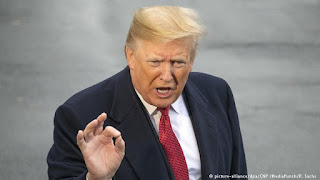 French President Emmanuel Macron called his colleague from the United States Donald Trump “good friend” and confirmed his words, patting him on the knee.

On the eve of his visit to Paris, US President Donald Trump called the words of French President Emmanuel Macron on the need for his own EU army “very offensive.” “Perhaps Europe should first pay its fair share in NATO, which is heavily subsidized by the United States,” Trump wrote in his Twitter microblog on Friday, November 9.

It is not the first time that Trump has come up with demands to the North Atlantic Alliance partners to increase their financial contribution to ensuring the block’s defense capability to 2 percent of GDP. Macron concerned about European security On November 6, Emmanuel Macron on the radio station Europe 1 stated that it was impossible to defend Europeans without a “real European army.” An own army is needed by the EU, “taking into account Russia, China and even the United States,” stressed Macron. According to him, the European Union cannot “rely only on the United States.” If the United States breaks the Treaty on the Elimination of Intermediate-Range and Shorter-Range Missiles (PRSMD) with Russia, the security of Europe will be the “main victim”, Macron noted. The intention to withdraw from the treaty, US President Donald Trump said October 20, 2018. At the same time, Trump allowed the possibility of concluding a new contract if China becomes its third party.

According to the AP, Macron warmly welcomed Trump. At some point, journalists asked the French president for a reaction to the post of his American colleague, in which he criticized the idea of ​​creating a European army in a tough form. In response, Macron friendly patted Trump’s knee and called him his good friend. At this moment his guest was sitting with a “stone face”.

Trump out at Macron

On November 11, Donald Trump and his wife Melania will attend commemorative events in Paris, dedicated to the 100th anniversary of the end of the First World War. France awaits the arrival of delegations from 98 countries. Earlier on the same day, a full-format meeting of the presidents of the Russian Federation and the United States was planned, but the interlocutor of the Kommersant newspaper, familiar with the situation, said that the French president had opposed the Putin-Trump summit in Paris.

The leaders of the United States and France met in Paris. With a friendly gesture, Macron answered the journalists’ question about Trump’s tweet, in which he was unflattering about Macron.
The American leader wrote that Macron’s appeal to the heads of European states about the need to create their own armed forces was offensive. Trump also recalled that before this, Europe would be nice to pay for NATO membership.

In response to a question from journalists, Macron called the current US president a “good friend” and patted him on the knee. Trump during the meeting was very welcome, but at the time of patting he sat with a straight face. A videotape incorporating this incident leads the Associated Press.
As the “Russian Dialogue” reported, the American president published a sharp statement in his microblog. He called on Macron and other European leaders to first settle with NATO, and then talk about the creation of a pan-European army. Earlier, Trump expressed doubt that the meeting with Vladimir Putin could take place on November 11 in the French capital.

It should be added that at the meeting in Paris, Macron also explained to Trump his desire to create a European army.