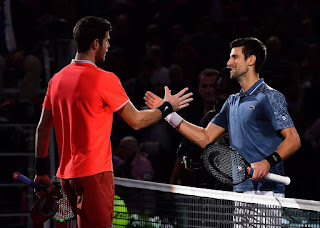 The powerful Moscow tennis player gave the big surprise at the last Masters 1,000, winning the title beating the new world number one.

The Russian Karen Khachanov, of 22 years and until now 18 of the world, won this Sunday against all odds the Masters 1000 crown of Paris-Bercy, last regular event of the season of the ATP World Tour.

For Khachanov, who will be the 11th in the world tomorrow, it is the first Masters 1000 title of his career. And he did it in a big way, as he defeated Serbian Novak Djokovic 7-5 6-4, who arrived with a run of 22 consecutive wins and will return to the top of the world rankings from Monday.

For many, it is the new Marat Safin, and it begins to confirm because the Muscovite until now had only won three ATP 250 tournaments, two of them this season in Marseille and Moscow, but in the gala, capital gave the giant leap in his career.

Khachanov surprises Djokovic in the final of Paris-Bercy

The gigantic Russian achieves his best success with a festival of winning shots and climbs to 11th place in the world.

Nicknamed as the new Marat Safin, the Muscovite had only won three ATP 250 tournaments so far, two of them this season, Marseille and Moscow, both indoors, but in Paris he has defeated four ‘top 10’ players in a week: Alexander Zverev, John Isner, Dominic Thiem and, last, a Djokovic visibly affected by the three hours of the semifinal that disputed the eve against the Swiss Roger Federer.

Khachanov entered his record in a tournament that Safin won three times (2000, 2002 and 2004), to become the first Russian to win this tournament since in 2006 Nikolay Davydenko did.

Khachanov stops Djokovic in Paris and adds his first 1,000 Masters

Khachanov replaces American Jack Sock in the track record and becomes the third tennis player to lift the trophy without being seeded, the first since the 2007 Argentine David Nalbandian did after beating Spanish Rafael Nadal in the final.

Until this edition of Paris, Khachanov had only played a semifinal of a Masters 1,000, the last tournament in Toronto, when he lost to Nadal, and this Sunday was his 36th match in tournaments in this category.

Contrast with Djokovic, who disputed his final number 47 in search of his title number 33 that will equal him with Nadal, who, despite everything, will snatch on Monday the scepter of world ranking that will hold for the fourth time in his career.

Twenty-two of the ranking last May, the Serbian has recovered a difference of 8.060 points to the Spanish to defend from the top of the ranking number one in the Nitto ATP Finals of the O2 in London, from next day 11.

Karen Khachanov made history and this was his reward

Since Nikolay Davydenko achieved it nine years ago, when he was crowned champion of the Shanghai Masters in 2009.

Thus ended a perfect week, where he beat four members of the ‘top-ten’. In eighths, he got rid of the American John Isner (10), in the quarters of the German Alexander Zverev (5), in semis of the Austrian Dominic Thiem (7) and now in the final of the Serbian Djokovic (2).

This was the fourth title of his rising career and as if that were not enough, starting tomorrow will dawn on the doors of the ‘top ten’ of the ATP to position itself as the new number 11 in the world.