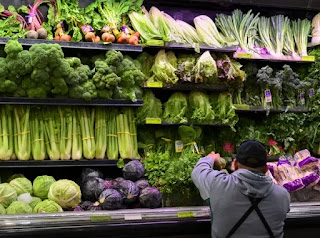 If your dishes for this Thanksgiving include a salad, you should be very careful that the mixture does not carry romaine lettuce, because the authorities have launched a health warning about the dangerous outbreak of a bacterium.

The Centers for Disease Control (CDC) recommends that consumers do not eat romaine lettuce and that retailers and restaurants do not serve or sell anything until more is investigated about an E. coli outbreak.

” Consumers who have any type of romaine lettuce in their home should not eat it and should throw it away, even if they have already eaten it and nobody has fallen ill,” the CDC warns.

In total, 13 people were hospitalized due to this bacterium, including a person with the hemolytic-uremic syndrome, a type of kidney failure, although no deaths were recorded. Romaine lettuce is not safe to eat, warned US consumers the Center for Disease Control.

Do not eat any romaine lettuce, FDA warns

The centers reported that 32 people in 11 states have become sick from eating contaminated lettuce. Of which 13 were hospitalized. No deaths have been reported. The Public Health Agency of Canada has reported that 18 people were infected with the same strain of E. coli. If you do not know if the lettuce is Roman or if a salad mix contains romaine lettuce, do not eat it and discard it.

Wash and disinfect the drawers or shelves in the refrigerators where the romaine lettuce was stored. Restaurants and retailers should not serve or sell romaine lettuce, including salads and salad mixes containing this type of lettuce. The origin of the outbreak is unknown and remains under investigation. The CDC did not limit the Roman warning of a particular agricultural area. A common strain of E. coli was detected in six of the sick people.

Five people died in the most recent major outbreak of contaminated Roman, which lasted from March to June of this year and resulted in 210 cases in 36 states. That outbreak goes back to the growing region of Yuma, Arizona, but the researchers never conclusively determined the precise source.

The last outbreak was due to a strain that has the same genetic fingerprint that caused a series of leafy green diseases last year in both the US and Canada. That outbreak was declared in January.