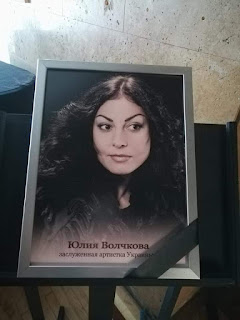 On Saturday, November 10, the death of 44-year-old Honored Artist of Ukraine Yulia Volochkova became known. The cause of death was a serious illness.

On the death of a celebrity on his page on Facebook said the official photographer of the theater Yevgeny Chekalkin? He posted a photo of Julia, rewound with a black tape, and signed: “Eternal memory.”

It is known that recently the Honored Artist of Ukraine was seriously ill. The disease has not yet been clarified. The actress of the Drama and Comedy Theater on the left bank of the Dnieper Yulia Volchkova died after a long struggle with oncology. After a course of therapy, she returned to the stage for a while, but later her condition deteriorated.

Volchkova died on November 10 in Kiev at the age of 44. In addition to playing in the theater, the actress is known for her roles in the series “Threads of Fate” and “Ring with Ruby”.

Natalia Zhavoronkova shared memories of actress Yulia Volchkova, who died on November 10 at the age of 44. The cause of her death was oncology, with which the woman has struggled for a long time. In addition to playing in the theater, the actress is known for her roles in the TV series “Threads of Fate” and “The Ring with Ruby.” “Yes, cancer mows people in earnest. Now, one in three dies or suffer from this terrible disease. It hurts, really,”the illusionist said.

Peter Mironov, a colleague in the theater remembered her: “The news was shocking: Yulechka Volchkova died! The embodiment of femininity, beauty, grace, elegance! Julia could not stand their grievances for general viewing. Only darkened eyes, but suddenly a sharp creeping of the head told about some kind of internal monologue, about a dispute with offenders. A proud woman, she overcame the pain and moved on.”

Later it became known that Yulia Volchkova died as a result of a prolonged oncological disease. Channel 5 reports this information, referring to the friends of Volchkova. At the same time, representatives of the actress have not yet confirmed the new data on the disease. About this, in particular, said several people in the comments to, the former head of the Ukrainian Union of Cinematographers, among them – TV presenter Tatyana Kravchenko. The illusionist Natalia Zhavoronkova also commented on oncology, but she later removed it.

Friends of Yulia Volchkova reported that the 44-year-old theater and film actress died due to cancer. This became known from one of the Ukrainian publications.

Volchkova was a very talented actress and graduated from the Kiev State Institute of Theatrical Art. Honored Artist of Ukraine was a great success on stage and was able to present any character with her own approach, which made her unique and her native theater appreciated her very much. 2018 takes away more and more talented people from the creative sphere. Actors, directors, singers, and artists simply die from serious illnesses and their fans grieve about what they did not have time to do. For example, Iosif Kobzon and Nikolai Karachentsov will remain forever in the hearts of their loyal fans, and Edward Ouspensky will be remembered for many generations thanks to his books and stories.