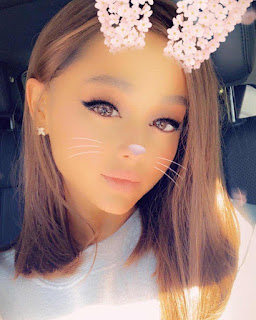 Although at the moment we only have a photo of her Instagram account with kitty filters included, Ariana Grande’s new haircut is one of those autumn cuts. Ariana seemed chained for life to her mane (and her ponytail).

In fact, recently his stylist, Chris Appleton , counted that pigtail reflects the attitude with which the singer wants to face each day.

“The higher we go, the more overwhelming it seems,” he said. And although she may have simply wanted to change – and period – the reality is that she has made this cut shortly after talking about her breakup with her boyfriend, Pete Davison that confirms a great popular theory, which says that there are two key moments in a woman’s life in which a change of look is usually desired most intensely: after a separation and before or after giving birth.

Well, in fact, there have been stylists who have insisted on confirming it with a survey included. But let’s go back to the meaning of this cut. It may not have been for the sentimental moment that it goes through – in fact, the great colorist Jo Hansford told us during an interview that “when your boyfriend leaves you, it is not time to change” – but the reality is that the cut has a crumb.

The singer has decided to go through the hairdresser and has said goodbye to her long hair. This is what she herself shared in an image on her Instagram account, in which we can see a photograph with midi hair at shoulder height, smooth hair, which has come up with fun filters, but in which you can see that has subtracted many inches of hair. An image that has revolutionized its fans, and has more than two million likes and more than 30 thousand comments.

The singer faces a new stage, after her breakup with Pete Davidson, and does so by giving a radical turn to her look, as can be seen in the image that does not accompany any comments. There is, as the stylist Daniele Sigigliano tells us, the belief that the change of look it is rigged to a personal crisis, according to the psychologists, but for his personal experience in the Madrilenian Blow Dry Bar, for him, it is not always like that. “Women like to renew themselves, to bring something new, it does not have to imply anything else. Just feel beautiful, “he says. But the truth is that the coincidence has not gone unnoticed.

Ariana Grande and her most radical change of look

We do not know if it’s related to her new song Thank U, Next, but Ariana Grande seems to want to cross her old relationship and move on to the next stage of her life. The singer decided to mark this event by saying goodbye to her signature hairstyle, the high-pitched ponytail. Finished, the extensions (for a moment, at least)!

After unexpectedly breaking his commitment to the comedian Pete Davidson, now the singer says goodbye to something very representative of his image: his long hair. Ari has cut her hair and not exactly. And it is that he has opted for a cut by the shoulders that also favors him a lot. A new era begins for Ariana Grande.

After the good reception of her last album, ‘Sweetener’, the singer is already on track with her next album. In addition, after breaking his commitment to Pete Davidson suddenly, he is making many changes in his life. While she’s been through a difficult time for several weeks, Ariana Grande unveiled a new haircut on her account Instagram, November 16, 2018. The American singer, known for its long and thick ponytails made additions, now put on more lightness.

Finish the cascade of hair, instead of a more simple and airy style. A radical change that has attracted no less than 2.4 million subscribers in just a few hours! Recently, on Twitter, the pretty brunette had explained to her girlfriend singer Camila Cabello “completely mocking ” to suffer “constant pain “by wearing his famous high and pulled ponytails. It seems that she has finally changed her mind.

It is not uncommon that, during a breakup, we opt for a radical change of head, to move on to something else once and for all. Ariana also mentioned that her ponytail was painful most of the time and gave her headaches. Could that be the reason she went under the shears?

In short, whether because of her breakage or the discomfort of her quilt, the beautiful brunette decided to go for a long square, shoulders, revealing the fact itself his real hair. There is no doubt, this hairstyle is going to delight!

Ariana Grande does not have the same mind at all. The singer of 25 years, in fact, cut her long brown hair and abandoned her hair extensions. On the night of Thursday to Friday, the No Tears Left to cry tube performer surprised her community of fans on Instagram by unveiling her all-new haircut. And we can say that it is a radical change since it now sports a square.

ARIANA GRANDE MAKES THE BUZZ WITH ITS NEW CUP

A new look that comes with one of the many Snapchat filters. Elsewhere on the web, some people are trying to make an analysis of this radical hair change, believing that the young star wants to draw a line on his painful past.

Indeed, lately, Ariana Grande has experienced several dramas. First, there was the attack at the end of his concert in Manchester on May 22, 2017. Then the death of his former boyfriend, the rapper Mac Miller after an overdose. Barely recovered from this disappearance, she must now make a new mourning: that of its break and the cancellation of his engagement with comedian Pete Davidson.

Her fans know superstar Ariana Grande (25) as a seductive vamp in tight designer clothes and flowing hair. But now the singer (hit “Bang Bang”) surprised her fans with a picture in which she is hardly recognizable.

The crass cut does not seem to detract from its popularity. With more than 134 million followers on Instagram, Ariana Grande takes third place on the popularity scale of the social media platform, following football god Cristiano Ronaldo and Selena Gomez.