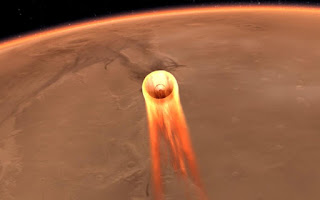 The US probe Insight landed on Monday, November 26, 2018, on Martian soil and has already sent the first photos of the surface of the red planet.

After seven years of work and seven months of travel through space, the US probe Insight “cocked” and shortly after sent the image.

Each successful stage of this millimeter and risky operation aroused a hubbub in the control center of NASA’s Jet Propulsion Laboratory (JPL) in Pasadena, California. The “confirmed landing” in the controller’s voice led the rest of her colleagues in control to shout with joy and embrace in celebration. It happened at 11:52:59 California time (3:52:59 pm in Peru), one minute earlier than planned.

“It was intense,” summed up the director of the US space agency Jim Bridenstine. “It’s a unique experience, incredible.”

Bridenstine also indicated that a few minutes after the “landing” he received a call from Vice President Mike Pence, who also celebrated on Twitter. The pose process was perfect: the activation of the parachute, the deployment of its legs and the speed reduction from 19,800 km / h to 8 km / h in just seven minutes. NASA made “final touches to the algorithm that guides the spacecraft to the surface” hours before its entry into the atmosphere, where the temperature reached 1,500ºC.

It had a reinforced heat shield to tolerate the impact.

The probe traveled 480 million kilometers at about 20,000 km / h, between three and four times faster than a rifle bullet, to reach a rectangular area of ​​about 10 km by 24 km.
The first photo was sent by two satellites that accompanied the InSight during its crossing to Mars.

“My first photo in #Marte,” NASA wrote in an account created for InSight on Twitter. “The lid of my lens has not been removed yet, but I had to show them the first look at my new home.”

Hours after his arrival, InSight deployed its solar panels, a phase that was also crucial, as it is the only way to charge their batteries every day.

“The InSight team can rest a little easier” after this stage, said Tom Hoffman, project manager at NASA. “It’s been a long day for the team, but tomorrow an exciting new chapter begins surface operations and the start of instrument deployment.”

The following video produced by Lockheed Martin, the main contractor in the construction of the InSight mission, explains in detail the characteristics of this landing, and the complexity it represented for space engineers. It has been titled “Seven minutes of terror”.

The $ 993 million project seeks to expand knowledge of the internal conditions of Mars, in an informed effort to send human explorers and reveal how rocky planets-like Earth-formed billions of years ago.

“But how prone to earthquakes is Mars? Its fundamental information that we need to know as humans who explore Mars,” Green said.

InSight will collect data through three instruments: a seismometer, a device to precisely locate the probe while Mars oscillates on its axis of rotation and a heat flow sensor that will be inserted 5 meters into the Martian subsoil.
After the probe is seated on the Martian surface, a robotic arm must place the seismometer directly on the ground.

The second element in importance is the heart monitor that will be placed in the subsoil.

The instrument will be introduced between 3 and 5 meters below the surface of Mars, according to NASA, at a depth 15 times greater than in any previous mission. Understanding the temperature of Mars is crucial for NASA’s purposes of sending people to the red planet by the 2030s.

Also, a pair of space minibars that traveled in the rocket also separated successfully.
Called Mars Cube One, or MarCO, these satellites the size of a briefcase “will fly their own way to Mars behind Insight” and will test new communications equipment in deep space, the US agency said.

Originally its launch was scheduled for 2016, but the discovery of leaks in one of the instruments a few months before the date forced the postponement.

The Apollo 8 a Christmas gift of technology

Why Vitaminwater wants you to trash your smartphone?