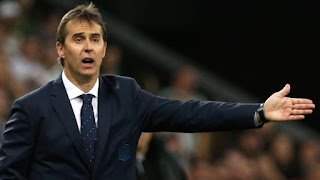 The three-time European champion lost from home against the Levant and his future is an uncertainty.

Julen Lopetegui seems to deny with his face that does not say anything that happens to Real Madrid. The coach is in everyone’s sight. The whole Santiago Bernabéu knows that what has just happened is not typical of its history, much less of its recent past: in the first steps after the European Triple Crown, in days of Zinedine Zidane, everything works badly.

Real Madrid fell at home against Levante 2-1, after receiving two goals in the initial 13 minutes. José Luis Morales and Roger Martí converted for the Catalan team of the Valencian Community. He did not reach Marcelo’s discount for the local team. There were discomfort and rejection in the Real’s farewell. The focus, of course: the coach.

Now, Real Madrid has five games without a win and get the worst way to classic next week against Barcelona in the culé territory. No one knows what will happen to Lopetegui. For now, private meetings and public silences.

The newspaper Marca, from the scene, launched a survey: 54% of the people (among more than 100,000 participants) want Lopetegui to be replaced. The same newspaper has an added truism: Lopetegui, who left the Spanish national team just before the World Cup to take over Real Madrid, falters. And he says that the team is “in ruins”.
He also offers a name as a possible replacement: Santiago Solari, a man from La Casa Blanca, current coach of the Real Madrid subsidiary, Castilla.

Lopetegui does not fear for his future

Julen Lopetegui spoke at a press conference after the defeat of Real Madrid against Levante. The white coach said that now what he thinks least is his future. There are those who know a lot about the intimate life of the giant of the Spanish capital who is the chosen of the president of the institution, Florentino Pérez. It is known: he is the one who decides everything that happens under the sky of the Santiago Bernabéu and its surroundings.

This was the meeting between Lopetegui, Sergio Ramos and Florentino after the defeat at Bernabéu
Florentino Pérez met with Julen Lopetegui and the future of the Basque coach at Real Madrid was defined.He had to face after the defeat, especially when the game was played at the Bernabéu and not in a visit. Julen Lopetegui met with Florentino Pérez after the defeat of Real Madrid against Levante for the last day of LaLiga Santander, the fifth consecutive slip of the Madrid team and that leaves him in a very delicate situation for the future of the tournament, especially when the Barcelona appears with one game less (so far).

After the talk that the president has maintained with Sergio Ramos, he has also summoned the coach to discuss and analyze the situation of Real Madrid. It cannot be that a team that has won three Champions League consecutively cannot win for the fifth time. The situation is uncomfortable, the moment the team lives are more than raw.

And the feeling that Julen Lopetegui has after that meeting is that he will continue as coach of Real Madrid, at least immediately. That feeling of the technician, without being categorical and without getting any commitment from Florentino Pérez, is positive, of continuity. This does not mean that after the Classic against Barcelona everything changes perspective, especially because you can not lose against the Catalans or move further in the tournament.

Despite this, there is no definitive decision and it can be in any sense. The president continues gathering opinions and developing that final decision to keep Lopetegui in the office or dismiss him. As we have seen, there are managers who have not answered the question about the continuity of the Basque coach.

It seems a circle of history. Solari was the perfect substitute, Player Number 12 when Zidane did wonders on the field dressed in white. Zidane, like Solari now, was coach of Team B just before starting his unbeatable cycle that ended so little by personal decision. Florentino wants to repeat the bet.