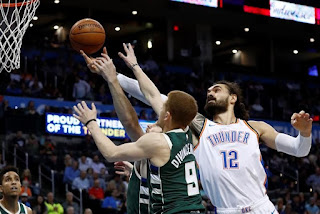 Golden State Warriors started the defense of their NBA ring with a busy and festive victory at the ORACLE Arena by 108-100 against Oklahoma City Thunder, where Alex Abrines, the only Spanish at this premiere of the considered best league in the world, enjoyed enough minutes.

The Balearic player was the only one of the nine national representatives who participated in this kickoff of the NBA consisting of only two games and enjoyed 23 minutes where he contributed 8 points, with a discreet night in the shot (3/8, with 2 / 6 in 3-pointers) and 2 rebounds to a team weighed down by the absence of his big crash, Russell Westbrook, still recovering from his knee operation, but he tried to water down the local party.

And is that the Warriors, in his last season in his current court, received tonight on Tuesday his rings of champions and celebrated with his first win, decided at the end and under the command of a great Stephen Curry, who brushed the ‘triple -double ‘with 32 points, 9 assists and 8 rebounds.

The base was the best of theirs and the most successful from the triple (5/8) because Kevin Durant, despite helping with 27 points, 8 rebounds and 6 assists, was not anything fine (0/5) in that facet, like the other ‘Brother Splash’, Klay Thompson (1/8). This trio exceeded the ten points with Damian Jones (12), while Draymond Green captured 13 rebounds, enough arguments that left nothing to the effort of Paul George (27), Denis Schroeder (21) and Steve Adams (17 and 11). rebounds).

Stephen Curry scored 32 points, handed nine assists and grabbed eight rebounds, Kevin Durant finished with 27 points, eight rebounds and six assists, and the Golden State Warriors started their road to their third consecutive NBA title on Tuesday with a win by 108-100 over the Oklahoma City Thunder.

Golden State needed a powerful fourth quarter to win on a festive night. The current champions received their rings before the kickoff that opened what will be their last season at the Oracle Arena. The team will play next year at the new Chase Center, across the Bay of San Francisco.

Klay Thompson converted just five of his 20 opportunities to total 14 points while center Damian Jones had 12 tallies in 6 of 7 for the Warriors in his first start and 26th of his career.
Paul George finished with 27 points for the Thunder, who struggled to find his pace and missed his ace Russell Westbrook, who underwent knee surgery last month.

The Warriors started a very strong offensive and at rest, they dominated with some clarity (57-47), but the Thunder knew how to hold after the restart and with 1:57 still holding options (99-97), but the current champions are not They let surprise.

In the other inaugural duel of the NBA, the favorites in East, Boston Celtis, won with solvency (107-85) after a great second part to one of the aspirants of his Conference as the Sixers of Filadelfia and with the outstanding notes in the local of the returns of Kyrie Irving and Gordon Hayward.