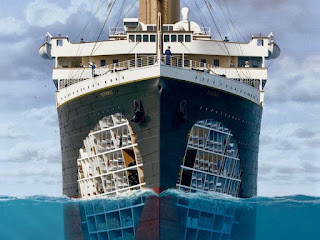 Blue Star Line, by Australian businessman Clive Palmar, has an idea in his head for a couple of years: make an exact replica of the Titanic and navigate the original route of the ship, Southampton-New York, only with a previous trip that will leave Dubai.

The idea of ​​a replica of the Titanic has kept the fans of the ship (and the film directed by James Cameron in 1997) on the lookout, it is assumed that in 2018 would make its maiden voyage, but was canceled due to problems with the Chinese company that would build it.

But on Monday it was announced that from March 2019, the company will resume the project, in the first instance, because its cruise company will no longer have London as its headquarters, but Paris, the company announced. “We will not open our European office until March 2019, with Paris as an ideal position to meet the needs of the company,” they shared on their official Facebook account.

The Titanic will go back to sea: ready to replay Rose and Jack on deck C?

An identical replica of the Titanic, which sank in the night of 14 to 15 April 1912 in the Atlantic Ocean while it rallied Southampton in New York, making 1,500 victims, should be launched in 2022.

110 years after its predecessor, the Titanic II, an exact replica of the steamer that sank in 1912, is expected to set sail for New York in 2022 from Southampton. Everything inside the ship will be recreated identically to the Titanic: decoration, 835 cabins, and ballrooms.

On the future Titanic II, we will be able to walk on the famous bridge C where the three classes of passengers met. And replay the scene of the famous James Cameron movie of 1997, since this is the place where Rose and Jack first noticed.

If the decoration on board will be that of the beginning of the 20th century, the technologies of navigation and security on board will be those of the 21st century. Also, unlike his, infamous, ancestor, the future ship will be provided with enough rescue channels for all passengers. What’s more, outdoor fireplaces will only have a decorative function.

Half a billion dollars

The man behind this $ 500 million project is Clive Palmer, one of Australia’s richest men, who want to take advantage of the global boom in the cruise market and some nostalgia.

The first crossing, Southampton-New York as the first Titanic, should take place in 2022. Another novelty compared to its predecessor, the Titanic II is expected to connect three continents explains the Australian billionaire: Asia (China), Europe (Southampton) and America (New York).

Company based in France

The company created to manage the construction of the ship should settle in France next March. The UK was initially considered to host this venture, but Brexit voted on by the British since then, decided Clive Palmer revise his plans.

Remains an unknown for the time, and not least: the price of tickets!

In the video below, Clive Palmer explains “his vision” of the Titanic II “a boat of peace”. And to conclude: “The Titanic was a dreamboat, the Titanic II is the boat where dreams will come true”.

It is expected that this new Titanic can transport 2. 435 passengers and 900 crew. It will have lifeboats with the capacity to accommodate 2,700 people, as well as rafts for 800 more, but will also include safety slides to comply with modern regulations. And to satisfy all the luxuries that the Titanic of 1912 had, Blue Star Line has invested 500 million dollars during several years to finance the project.

The prices for the inaugural trip have not yet been revealed, but according to some media reports, US billionaires have offered up to one million dollars for traveling on the Titanic II. It is planned that all the amenities that the original Titanic had are part of II.