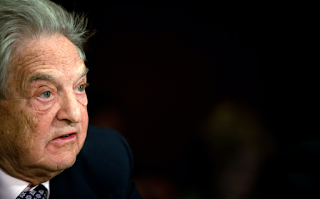 While a salvo of parcel bombs was sent to personalities, including billionaire philanthropist George Soros, the son of the latter published a tribune in the New York Times. Alexander Soros denounces the current climate of political violence in the United States.

On Wednesday, October 24, it was learned that similar packages addressed to former President and Secretary of State Barack Obama and Hillary Clinton, as well as other Democratic personalities, were also intercepted. And this Thursday, 25th, the authorities indicated that the former.

The police located Monday an explosive in the house that the multimillionaire and American philanthropist George Soros has in Bedford (New York), local media reported today.

The agents arrived at the residence of Soros, who is the usual object of criticism by the far right, after receiving a call in which it was indicated that they had found a suspicious package in a mailbox, explained CNN.

“A housing employee opened the package and said it appeared to be an explosive device,” the police said, according to The New York Times.

The Soros employee who found the package took him to a nearby wooded area and called the Bedford police, according to the sources.

“Monday, October 22 in the afternoon, an explosive package was delivered to my father’s home, north of New York,” said the son of philanthropist George Soros in a column published by the New York Times. “One of our employees has alerted the police,” continues Alexander Soros, ” and the authorities have fortunately managed to detonate the machine safely. “

It was reported that the package addressed to a local owned by De Niro in Tribeca is similar to the bombs targeted at CNN, Barack Obama, Hillary Clinton, George Soros, and other personalities

The technicians of the explosives detection team detonated the device, confirmed the Police, which has forwarded the investigations to the Joint Task Force against Terrorism of the FBI.

For Alexander Soros, a 2016 campaign spot, showing Jewish figures from the world of finance, is the source of the parcel bomb sent to his father.

After the emotion that followed the sending of homemade bombs to opponents of Donald Trump, the political quickly resumed its rights: the US president called Wednesday at the rally, but stressed the “responsibility” of the media in the deterioration of current climate, while Democrats accuse the Republican of stirring up violence.

Donald Trump has ruled that “any act or threat of political violence” is “an attack on our democracy itself”. At the same time, at a campaign rally in Wisconsin, he called on the media to “cease endless hostilities and constant and often false negative attacks.”

In just a few hours earlier, six suspicious package alerts followed, from New York to Florida via Washington, not to mention a false alarm in California, which helped create a climate of psychosis.