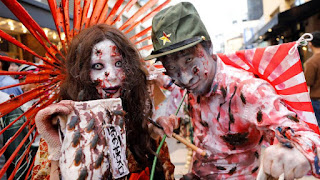 From cinema to technology, through costumes, gastronomy and even guided visits to gloomy places, nothing escapes the celebration of the Night of the Dead.

Like the Carnival, Halloween represents the exaltation of excesses before Lent and has come to stay and take away something so natural, though painful, as death is. 40 years ago we began to hear about this celebration for the films and sequels of horror movies, later on, they were pumpkins, costumes, and gastronomy. Nowadays, the consumerist explosion of Halloween comes to our lives united in these dates to any everyday aspect: applications, trips, guided tours, escape rooms, experiences, make-up, costumes, special decorations … without forgetting that in most of the schools has been installed as a usual party.

No matter how much the name imposes -Halloween, Noche de Muertos or Noche de Brujas-, the celebration is synonymous with having fun, because any excuse is good for fun, imagination and, of course, for business with justification of the ‘trick or treat’, the sweets and the disguises of ghosts, skeletons or witches.

The roots of Halloween are linked to an ancient festival of the Celts who lived 2,000 years ago in Ireland, the United Kingdom and northern France called Samhain, which meant ‘end of summer, and which, therefore, was related to the time of the harvests and also coincided with the start of the New Year on November 1.

The celebration that we know today, therefore, is a mixture of traditions, fashions, desire for fun and, of course, a lot of consumerism before starting the assault on Christmas. Nowadays it is celebrated in style in the Anglo-Saxon countries such as Canada, the United States, the United Kingdom, and Ireland, but it also enjoys a great following in Spain and in several Latin American countries that, with their own adaptations, have also succumbed to the celebration of fear and humor surrounded by sweets, pumpkins, candles, spiders, witches, and costume parades.

Pumpkins are part of the celebration

A cabbage removed from the ground could give clues to the work or personality of the future partner. They also “read” the shells of the nut. Food was an important component of the celebrations and one of the most characteristic habits involved the children who went from house to house singing rhymes or praying for the souls of the dead.

For the first proposal, the experts have curled the hair to get a frizz effect (fried hair) and have carded it to get a lot of volumes, especially at the top. They have added two braids on the side front and metal appliques on some strands to create movement. They accompany the hairstyle with a makeup that highlights the smoky eyes in gray and purple, marking well the lower contour of the eye with a more intense purple and well-angled cheekbones and deep purple lips.

It is a classic of classics and if you have not seen it yet it is a “must” on Halloween night.
They say that when this movie was released in the 70s, there were people who suffered panic attacks and that Linda Blair herself (the protagonist) was traumatized. Actually, there are several rumors about this film, but it is by far one of the best horror plots.

If yours are the costumes of zombies, ghosts, and mummies, this performance will come too well. The complexity of the characterization is intermediate, you just have to get a well-tinted toupee. The lenses easily get them in the Persian Bio-Bio. It is recommended to review a couple of videos to imitate their guttural laughter and learn a couple of average Pinochet comments.