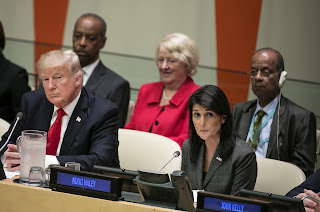 Nikki Haley took over the representation of the United States before the United Nations with no experience in foreign policy, but in less than two years she made many friends, including with ambassadors from countries targeted by the Donald Trump government.

The announcement that he would leave office at the end of the year caused a stir at the UN, where some expressed bewilderment and even sadness and alarm.

“It was a surprise, personally, nothing pleasant,” said Russian Ambassador Vassily Nebenzia, whose country has serious differences with the United States on issues such as Syria, Iran and the conflict between Israel and the Palestinians.

The ambassadors of the powerful Security Council that worked closely with Haley praised her, reflecting her diplomatic skills, although several of her countries, including traditional US allies, have very different positions in foreign policy.

When Haley arrived at the UN on January 27, 2017, she was the former governor of South Carolina and a rookie in the field of international diplomacy, but she made her presence felt immediately, announcing a new approach to US foreign policy.
The goal of the Trump government was to demonstrate the power of the United States, make itself felt and defend its allies. He warned that “we took note” of the countries that opposed the United States and said that his country would not sit idly by.

Haley pursued that goal and at the same time polished his diplomatic skills, which were recognized by half a dozen countries of the Security Council, made up of 15 nations, before a closed-door meeting on Tuesday to deal with Syria and chemical weapons.

Nebenzia said she had a “good working and personal relationship” with Haley “despite the differences we had and still have”.

“She has a charismatic personality,” she added. “She was a friend of all of us.”

The ambassador of Bolivia to the UN Sasha Llorentty Soliz said that the Security Council was “like a family, sometimes dysfunctional, but in which we all love each other, I really like Nikki”.

Good personal relationships, however, never obscured the deep differences around a number of issues, ranging from US policy towards Syria to Trump’s withdrawal from the nuclear agreement with Iran, from the Paris climate agreement and from the Council of Human Rights of the UN. The decisions of Washington to stop funding the UN agency for Palestinian refugees and to move the US embassy in Israel to Jerusalem also generated discomfort among several members of the Council.

Llorentty Soliz highlighted these differences and echoed criticism from Bolivian President Evo Morales, who vigorously denounced US policy towards Iran, the Middle East, and immigration during a presentation to the Security Council that was chaired by Trump on June 26. September 2018

The Swedish ambassador to the UN Olof Skook said that “there are issues related to the UN in which we do not always agree, but with Nikki, there was always a close, respectful and very frank relationship”. While Haley’s speeches to the Council could be “very hard,” she said, she often invited members of the agency to her home after them.

French ambassador Francois Delattre, who met Haley when she was governor of South Carolina and was ambassador to Washington, said that “although we did not agree on anything, we developed a particularly close and constructive working relationship based on trust”.

“Nikki Haley is one of the most talented and authentic US government officials I have ever met,” he said.

With Trump by his side in the White House, Haley said her six years as governor of a state and her nearly two years in the UN had been “an intense period and I believe in limited mandates.”

“I gave everything I have in these last eight years,” he added, “I think you do not have to be selfish and you have to know when to step aside and let someone else take over the job.”

Daughter of immigrants from India, Haley, who is 46 years old and not rich, hinted in her resignation letter that she would venture into the private sector.
Many diplomats said privately that they believed Haley would run for president, although she ruled out doing so in 2020 at her press conference on Tuesday.

“She’s young, full of energy, ambitious,” commented Nebenzia, a Russian, “I think we’ll see her again after she takes a well-deserved rest.”