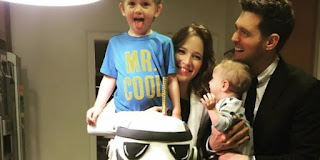 Michael Bublé reveals that he will leave the stage to dedicate himself to his sick son: “I do not know if I can finish this conversation without crying”

Canadian singer Michael Bublé could abandon music and social networks to support his son, who has been fighting cancer since November 2016, several US media reported.

Noah Bublé, 3 years old and product of his relationship with actress Luisana Lopilato, is in remission. However, Bublé rethought his career after the troubles experienced with the minor.

“I’m retiring from the industry. I have completed a perfect album. I can leave while I’m at the top, “Bublé told the Daily Mail.

Michel Bublé and his son Noah.

A final premature will have the musical career of Michael Bublé. This was announced by the same singer, who set a date for his retirement from the stage and granted what, according to him, will be his “last interview”.

The drastic decision is due to the wear and tear caused by the illness suffered by his little son since 2016. In fact, he admitted that he no longer “has the stomach” to endure fame after the illness and that when the child was diagnosed, he “I just wanted to die.”

“This is my last interview. I will retire from business. I made the perfect record and now I can go on top, “the Canadian told the British newspaper Daily Mail, referring to the album he will release in November.

The winning artist of four Grammy awards was married seven years ago to the Argentine actress Luisiana Lopilato, with whom she has had three children so far: Noah, Elias, and Vida. The eldest of them, Noah, is the one who was diagnosed with liver cancer in his short three years.

The suffering generated a break in the professional life of both artists, but the crisis was profound enough to change their lives.

Michael Bublé is known throughout the world for his extensive musical career. He has sold more than 75 million albums worldwide and is now preparing for the release of his new album “Love”, whose release is scheduled for November 16, with the promotional single “When I Fall in Love”.

While Noah was recently declared cancer-free, the singer acknowledges that “my whole being has changed. My perception of life. I do not know if I can end this conversation without crying. And I never lost control of my emotions in public. ”

The husband of Luisana Lopilato declared that he will leave his career due to the illness that his son suffers.

Michael Bublé announced the end of his musical career

Michael Bublé revealed that he will abandon music due to the wear and tear caused by the illness of his son, who was diagnosed with liver cancer.

The Canadian singer of 43 years announced that he will leave the stages after the release of his latest album, called “Love “, which will be released on November 16.

The tremendous decision announced during an interview given to the Daily Mail’s Weekend Magazine in what he called “the last interview” and is linked to the illness suffered by his son Noah, who was diagnosed with liver cancer two years ago.

“I will retire from the business. I have made the perfect record and now I can go on top” said the Canadian musician. And he confessed: “My whole being has changed. My perception of life. I do not know if I can end this conversation without crying. And I never lost control of my emotions in public. “

“I really wanted to die, I did not know how I was still breathing, my wife was the same and, although I tried to be stronger for both, it really was not,” said the husband of the Argentine actress, Luisana Lopilato.

Noah, who is now five years old, is currently in remission after his battle with liver cancer, but the terrible experience changed the life of Bublé, who has since questioned his career in show business.

“I do not have the stomach for this anymore. The narcissism of celebrities. This is my last interview, I’m retiring, and “he closed.

Spotify Wrap feature for your most listened songs

Ariana Grande cut her ponytail to copy the K Kardashian

Lady Gaga is committed to her boyfriend Christian Carino

Selena Gomez enters the psychiatric center after an emotional crisis