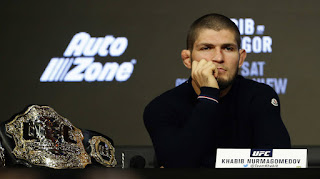 Conor McGregor vs. Khabib Nurmagomedov: who is the Russian fighter who as a child trained with a bear and now threatens the UFC star

One of the first images that can be found of Khabib Nurmagomedov on the internet is a video in which he appears, with nine years old, fighting against a cub that is bigger than him.
For more than a minute you can see little Khabib wallowing with the animal, showing courage worthy of pride for his father, Abdulmanap, who was the one who had incited the confrontation.

“Not far from death”: the insane and dangerous method to lose 7 kg in less than a day

Twenty-two years later, Nurmagomedov is preparing for a new fight, the most important of his career, in which he will defend his crown of lightweight champion of the Ultimate Fighting Championship against the top star of the main promoter of mixed martial arts in the world, Conor McGregor.

McGregor plants Khabib for a bottle of whiskey

The most anticipated fight in the history of mixed martial arts is red hot after the last appearance before the media offered by the two aspirants to the lightweight belt It will be the fight that will mark the return of the Irish fighter to the octagon after his multi-million dollar foray into boxing against Floyd Mayweather and his problems with the police.

The promoters of the fight on Saturday say it is a war between two forces that have left their mark on the UFC.

The most anticipated fight in the history of mixed martial arts is red hot after the last appearance before the media offered by Conor McGregor and Khabib Nurmagomedov before facing the lightweight belt. After answering the questions of the journalists, the Russian tired of waiting for his rival and left only UFC president Dana White, who played down the issue: ” There was already a press conference, the important thing is the weighing of this Friday and Saturday’s fight. ”

But although the name of McGregor is known, on his rival there is an aura of mystery despite being a fighter who remains unbeaten in 26 fights.

It is the longest invincibility streak in the history of mixed martial arts.

While summing those victories, Khabib, as they promote in the fight, also became the first Russian to win in the UFC and also in the first fighter of Muslim origin. Born in 1988 in Dagestan (now Russia), his father was a decorated army veteran and expert in hand-to-hand combat.

More brutal and more modern: how the phenomenon of Mixed Martial Arts is knocking out boxing

At age 8 he began his training in the fight, a popular sport in the region, and soon after he became interested in martial arts. He learned from his father judo and sambo, a form of combat that was originally developed by the Soviet Red Army in the 20s and that is based on the combination of the most effective techniques of various disciplines.

Sambo is the acronym of SAMozashchita Bez Oruzhiya, which translated into Castilian means “self-defense without weapons”.

What gave rise to the reply

“He speaks a language and goes saying, ‘Oh, we fought against the English empire,’ but what happened to your language?” Nunrmagomedov asked.

His first fight in mixed martial arts was in September 2008 and in the space of a month he got four victories. As it happened in the first confrontation in New York, McGregor took advantage of the show to promote his brand of alcoholic beverages ‘Proper Nº Twelve’ through constant attacks on the Jameson brothers, owners of the leading company in Ireland. Quite the opposite was Nurmagomedov, who distilled professionalism in his responses and withdrew booed: “I have a tight schedule, I’m punctual, it’s not my fault that others are not.”

By January 2012 he had already been recruited by the UFC, where he began a race as successful as irregular, interrupted on numerous occasions by injuries.

In 2013 he managed to beat the Americans Abel Trujillo and Pat Healy, capturing the attention of UFC president Dana White, who said: “This guy is fascinating, we will probably do great things with this guy.”

But affected by the injuries had to wait until April of this year to be able to fight for the world crown. It had to have been against Tony Ferguson, the latter had to be replaced by an injury by Max Holloway, who at the same time gave up the fight and his place was taken by Al Iaquinta.

There is no doubt that winning will be more known, but losing will only have spotlights for a fighter and that will be Conor McGregor.