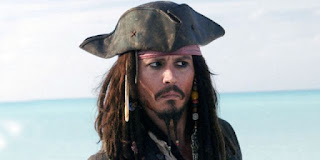 Stuart Beattie, the original scriptwriter of the saga, confirmed that the actor will not be part of the new installments of the franchise. It is not yet known who will play the famous captain.

The future of the saga of pirates that more people take to the cinemas of the world is in the hands of Disney, and apparently, that company does not have in its plans to have Johnny Depp to interpret the always clueless Jack Sparrow.

The sixth edition of the “Pirates of the Caribbean” series comes with many surprises. One that caught the attention of fans of the movie is that it would indicate that Johnny Depp will no longer be part of the film.

In an interview for the Daily Mail, Stuart Beattie, the screenwriter of the films, confirmed that they are looking for another protagonist.

“I think Jack Sparrow will be Johnny’s legacy. He is the only character he has played five times. He disguises himself to visit children in hospitals. Before Jack Sparrow appeared, Depp was considered that kind of independent and quirky actor who made small, cool films by Tim Burton, but by no means was he a movie star. “

The news did not fall very well among the fans of the series, who believe that this character can only play Johnny Depp and that none would do as well.

Speaking to the Daily Mail, screenwriter Stuart Beattie confirmed that the break between the actor and the franchise came in friendly terms. “I think Jack Sparrow will be his legacy. He is the only character who has performed five times and even disguised himself to visit children in hospitals. Before Sparrow, Depp was not considered a movie star, “Beattie said.

JOHNNY DEPP WILL NOT BE PART OF “PIRATES OF THE CARIBBEAN”

The British tabloid claims that the production of the next film in the series seeks a new interpreter for the role of Sparrow. While that happens, in Hollywood and speculate if the personal and professional moment of Johnny Depp influenced the heads of Disney to not hire him again.

During the filming of the last film in the saga, Salazar’s Revenge, Depp dragged his alcohol problems and unpunctuality to the recording. In addition, he lived moments of tension in his marriage to the actress Amber Heard who accused him of hitting her on several occasions.

Depp, from the beginning of the adventure franchise, played Jack Sparrow five times for 15 years, from 2003 to 2017. Beyond the personal life of the actor, critics agree that ‘Pirates of the Caribbean’ would not be the same without the masterful way in which Depp played the character of Sparrow. No doubt, many fans of all ages will miss it.

The 5 of Johnny Depp as ‘Jack Sparrow’

In recent months, the actor has been strongly criticized for the accusations of domestic violence of his ex-companion, Amber Heard, his addiction to alcohol and some financial setbacks. An image that does not match the values ​​of Disney, which could have precipitated the death of his character. We remember the dismissal of James Gunn, the director of Guardians of the Galaxy, by Marvel, following the discovery of old tweets sexist.

His departure represents a fantastic opportunity for Disney. The author indirectly confirms the fact that Disney is currently studying the possibility of a reboot for his franchise. The rumor of a reboot had emerged a few days ago, fueling the fantasies of fans on a return of Jack Sparrow in front of the camera.

This is how Joaquin Phoenix looks like as the Joker