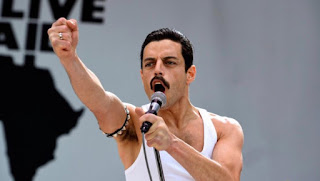 In this preview, you can see the whole transformation of Rami Malek into Freddie Mercury.

November 2 premieres Bohemian Rhapsody, the film that will show part of the story of Queen and its leader Freddie Mercury.

Rami Malek, an actor who plays Mercury, has shown great similarities with the singer, and in the advances, they have shown, it is seen that there are a deep work and study of the character. “It’s an immense responsibility, but it was something I was very anxious to take on,” Malek said of the preparation of his performance.

In this new advance, we can see the whole journey of Rami’s transformation into Freddie: from the choreography, the specialists in movement and the costumes.

Ready Freddie – Rami Malek and the art of being Freddie Mercury

A video was released that narrates the process by which Rami Malek had to pass to become Freddie Mercury for the film Bohemian Rapsody.
In the video, in addition to showing scenes never before seen, Malek narrates the complexity to fill the shoes of Mercury and the intense mental and physical work to which he was subjected during the filming.

Bohemian Rapsody tells the story of Queen from its inception, to the Live Aid concert at the 1985 Wembley Stadium.

IS RAMI THE NEW FREDDIE MERCURY?

The long-awaited biopic about Freddie Mercury opens in a few weeks.
The film is starring Rami Malek in the role of Freddie Mercury. Now, a new video shows Rami’s effort to try to imitate the Queen singer.
And he assures:

“It’s been an immense responsibility, but it was something I was very anxious to take on. I worked closely with a movement trainer to identify the details of Freddie’s personification and also underwent “about 50 hours of costume testing” as part of the film. ”

Malek, known for his role in the series Mr. Robot, stands out for his great resemblance to Mercury, which has even traced their movements on stage and their ways of singing, according to the first images that have circulated about the film.

The recordings began on September 8, 2017, with the recreation of the Live Aid stage, located on the former Royal Air Force airfield at Bovingdon.
Have you vibrated with hits like Bohemian Rhapsody that rightly gives the film its title? Have you been excited and danced with Crazy little thing called love? Have you chanted to open lung I Want to Break Free? undoubtedly all your emotions will come to the surface with this tape.
So put the date in your agenda so that the day of the premiere you are in the room of your favorite cinema popcorn in hand to get excited about the movie.