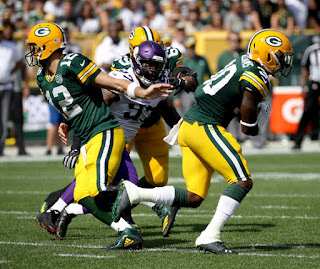 In Week 1 were Browns and Steelers, now at Lambeau it was registered evenly between Minnesota and Green Bay.

Aaron Rodgers could not prevail at home and the Packers must settle for bittersweet results although there was controversy included. Two weeks of the NFL season 2018 go and this Sunday was the second draw with Minnesota Vikings and Green Bay Packers as protagonists.

In 1961 began a rivalry that is now a classic of the NFC North. In 57 years of fighting between Packers and Vikings, they have only drawn three times. The first occasion this occurred was in 1978 when they finished the game with a score of 10-10. Five years ago the same thing happened, but the electronic scored 26-26 at the end. This Sunday we witnessed the third occasion when the match was made to 29.

The Packers were the first to open the scoring with a pass from Aaron Rodgers to Randall Cobb, although the Vikings responded in the next offensive series at the hands of Laquon Treadwell. If last week were Browns and Steelers who after five football rooms did not find victory, the story was repeated in Lambeau Field and with a very similar outcome, a field goal missed with the clock in zeros.

Daniel Carlson, Minnesota’s rookie kicker, could not hit a 35-yard attempt and closed a frightening midday in which he missed his three field goal kicks.

In the second quarter, the Packers got back up with Davante Adams as the orchestrator of the play and in the twilight of the first half Mason Crosby enlarged the distance with a field goal. Although Rodgers could not return to make present in the market since the remaining 12 points of Green Bay came from the foot of Crosby.

In the last period, Minnesota made the manhunt and scored 22 points to make the match was as in the beginning, without a winner. The controversy arose in the offensive series where Minnesota got the tie because the referees reversed the interception of the safety Clinton Dix and marked a very tight illegal contact against Cousins.

In the first overtime offensive series, Cousins ​​led the Vikings to field goal field, but rookie kicker Daniel Carlson missed the attempt ─ it was his second unconverted kick─. Aaron Rodgers was unable to take the game forward and left everything in the hands of the defense.

But the Packer defense could not stop Cousins ​​and this gave him the opportunity to redeem Carlson, who with four seconds to play missed the field goal that would mean the third straight win by the Mike Zimmer against Wisconsin.

Mason Crosby was the opposite face of the coin, as he connected five of six shipments between the posts, assisting an offense that looked ineffective as seldom despite Aaron Rodgers did play after being in doubt for a knee problem. With the tie 29-29, this second draw equals the maximum number in an NFL campaign that occurred in 2016 and 1997.