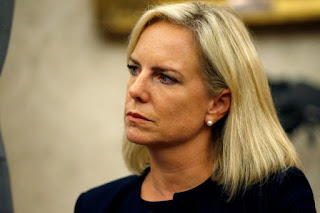 The Trump administration is proposing a plan to prevent immigrants from becoming a “burden” for Americans by restricting access to the green card for those benefiting from state-provided social benefits, such as food aid and education. ‘Housing assistance.

This measure, published on the website of the Department of Homeland Security on Saturday, could force millions of poor immigrants who depend on public assistance to choose between giving up the benefits they might be eligible for or getting a green card to live and work. Work legally in the United States.

Older immigrants, many of whom have access to low-cost prescription drugs, may also be forced to stop participating in the benefits program to avoid being considered a burden on taxpayers.

Encourage immigration of the most affluent

The proposal, which will not need to be approved by Congress, is expected to reach 382,000 people a year. Homeland Security recalls on its website that the idea of ​​”public office” applied to the process of admitting immigrants dates back to the Immigration Act of 1882.

“Those seeking to immigrate to the United States must show that they can provide for their financial needs,” said Homeland Security Secretary Kirstjen Nielsen.

This proposed regulation will implement a law passed by Congress that aims to promote self-sufficiency for immigrants and to ensure that they do not risk becoming a burden on US taxpayers.

Kirstjen Nielsen recalled that those seeking to immigrate to the United States must show that they can provide for their financial needs. Now, the new regulations will require immigration officials to see the perception of social benefits as a “heavy negative factor” for those who ask to stay in the country legally.

Those who are likely to become dependent on government help will probably be refused.

The rule will thus affect people seeking to immigrate permanently to the United States and those who hold a temporary visa, but who seek to remain in the long term, including students and workers.
In limited cases, immigrants could be asked to prove that they have a cash reserve of at least $ 10,000.

The 447-page project, entitled Inadmissibility on Public Charge Grounds, will not apply to families whose income is below 15% of the minimum poverty line.
Some people with mental or heart disease, as well as cancer, will also be considered potential weight for society, especially if they are unable to prove that they have private health insurance.

Immigrant advocacy organizations were quick to respond to this announcement.

“This is another sneaky attempt to reduce legal immigration, which ultimately harms our communities and our country,” he adds.

Marielena Hincapié, executive director of the National Center for Immigration Law, issued a statement Saturday criticizing the proposed measure.
The way you contribute to the community – not the content of your portfolio – should be what matters most. This proposed rule does the opposite and makes it clear that the Trump administration continues to say that only the richest can afford to build a future in this country.

The Trump administration has been working on this new measure for months. She was strongly encouraged by White House advisor Stephen Miller, according to CNN. Once the rule is officially released, a public comment period will be organized to allow Americans and interest groups to submit comments.
Defense groups could challenge the rule in court.