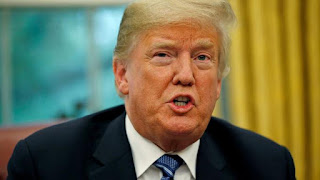 The commercial reprimand, which will be 10% of the value of the goods, will cover half of the imports from the Asian giant

Donald Trump continues tightening the nuts to China: he wants the Asian giant to agree to negotiate. The president has already decided to activate the second phase of his strategy and apply tariffs on imported goods worth 200,000 million dollars. It will thus cover half of the Chinese products that cross the United States border. The Republican threat in parallel with raising the reprimand to an additional list worth 267,000 million, which will cover all imports of goods.

The protectionist action will be announced shortly, according to several American media. The president met on Thursday at the White House with his main economic advisers to assess the different options. The meeting was attended by the Secretary of the Treasury, Steven Mnuchin, the Secretary of Commerce, Wilbur Ross, and the representative of Foreign Trade, Ambassador Robert Lighthizer. The US has already activated tariffs on imported Chinese products worth 50,000 million.

Trump is not willing to lower the swords in front of China, but not everyone in their cabinets agrees to go so far and prefer to give a new opportunity for negotiation. Everything happens, in addition, while the US negotiates with Canada to try to add it to the agreement that closed with Mexico last month to renew the North American Free Trade Agreement (NAFTA, in its acronym in English).

The deadline for the Office of Foreign Trade to start applying the new tariffs expired last week. Trump, however, is not willing to back down so quickly. During the last week, he warned that he was prepared to activate the tariffs and that he could announce them at any time. The third battery, in any case, should be submitted before a consultation period.

If the three figures are added together, the tariffs will basically cover all imports of Chinese goods. Beijing warns, meanwhile, that it is ready to respond to any protectionist measure. Larry Kudlow, the chief economic adviser in the White House, insists that Donald Trump is frustrated with the scant progress they are having in the talks because the Chinese do not accede to their demands.

The tariffs in this second round will be 10%, below the 25% initially raised. It will apply to thousands of products, such as cameras, phones. vacuum cleaners, toys or tires. This Thursday, the president sent a message on social networks indicating that he feels no pressure. That despite the fact that companies such as Apple or Ford Motor warned these days of the consequences of escalating their business and the consumer.

The trade deficit accumulated up to July with China reached 233.5 billion dollars. It is almost 10% higher when compared to the same period of 2017. It goes contrary to what Trump promised, which seeks to cut it in half. For this reason, Wall Street assumes that the tension will continue and does not see a change in tactics until after the legislative elections.

The turn to the left of the Democratic Party has been developing since at least 2016, was evident in the wave of enthusiasm that the candidacy of Bernie Sanders raised and also in the more progressive tone of Clinton herself. “It’s a long-term development, not an abrupt change of 2018,” agrees Geoffrey Skelley of the University of Virginia, for whom “the Sanders campaign was part of this change, and the reaction to Donald Trump as well, but there are factors additional in each of those progressive victories that can not be completely linked to their ideological position [more to the left]. ” For example, in the case of Ocasio-Cortez, the triumph is part of a rapidly progressive and diverse district (Queens-Bronx) and its unexpected victory combines, for Skelley, “ideology but also identity politics”.

The interpretation, in addition, is that Washington plays with advantage to see the collapse of the Asian market. In the environment of the president do not rule out, however, that Donald Trump can meet with Xi Jinping during the General Assembly of the United Nations, within a week. The other possibility is that they do so during the G20 meeting scheduled for November in Buenos Aires.

The divergence between moderates and leftists should not be read as a fracture, since, in the primary phase, as with all parties and in all elections, the differences in speeches become more evident because the candidate for the candidacy competes by the votes of the same base. And not all the winners in this phase, in which the names that will fight on November 6 are chosen, will reach the seats. While Ayanna Pressley, from Massachusetts, and Ocasio-Cortez, from New York, have all the ballots to win, Gillum’s victory would be a feat: Democrats have not governed Florida since 1999.

Kudlow says the hammer has not stopped yet and that there is a dialogue between the two leaders, but insists that Trump firmly believes that the current system does not work and attributes the blame partly to China. The president also said these days that the talks with Canada are moving forward, although it remains to be seen if they yield any results. He also announced that he has open negotiations with Japan.

Trump wants an exit from Syria after Afghanistan