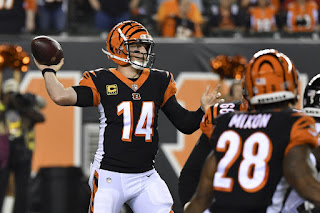 Too slow in the first match of the second week, the Ravens ran after the score throughout the game. The problems encountered by Cincinnati in attack during the second part of the game must frustrate even more this team Baltimore who had shown excellent things in week 1.

A tough start to the two attacks on Cincinnati’s Paul Brown Stadium, Joe Flacco (32/55, 276 yards, 2 touchdowns, 2 interceptions) was even intercepted on his second drive by safety rookie Jessie Bates. The Bengals return in a good position and Andy Dalton (24/42, 276 yards, 4 touchdowns) finds AJ Green in the corner of the end zone for the first points of the match (7-0). While the Ravens continue to stomp on offense, AJ Green receives his second touchdown of the game after just over 9 minutes of play (14-0). Cincinnati does not stop there, Ohio players continue to walk on Baltimore players and Andy Dalton finds AJ Green (5 receptions, 69 yards, 3 touchdowns) for their third touchdown of the game (21-0).

After 3 punts and an interception on their first 4 offensive drives, the Ravens wake up. John Brown (4 receptions, 92 yards, 1 touchdown) catches a 45-yard pass that Jessie Bates should have intercepted. Darqueze Dennard gives Baltimore a chance by making a defensive pass interference in the end zone that Javorius Allen turns into a touchdown on the next action (21-7).

The first points scored by Baltimore do not have the ability to curb the Bengals attack which continues to roll converting several 3rd attempts. Tyler Boyd (6 receptions, 91 yards, 1 touchdown) receives the 4th touchdown of the match for the Bengals who seem unstoppable in the first period. At this point, Andy Dalton is 14/22 for 178 yards, 4 touchdowns, without committing a single interception and all that in primetime, Baltimore managed to score at 8 seconds of halftime (28-14) on one of Joe Flacco’s few goods passes in the first half. The Baltimore quarterback seems far less comfortable against his divisional rivals than the Bills defense in Week 1.

Back from the break, the Bengals are a little less sharp and applied in the attack. They concede several penalties that prevent them from moving forward. They punt twice as the Ravens return to 11 points with a field goal of 55 yards Justin Tucker, still performing. The trouble for the Ravens is that they do not really take off in the attack. Imprecise passes here, a missing yard on a fourth attempt and it becomes very difficult to pick up the score.

Throughout the 3rd quarter, the Cincinnati offense cannot find the fire that animated it during the first 30 minutes, but the defense continues to do a great job. Carlos Dunlap deflected and Shawn Williams intercepted a pass from Joe Flacco to give their attack a chance to widen the gap again, but for the fifth time in a row, Cincinnati could not convert a third attempt.

Conversely, Baltimore begins to move the ball a little better. Flacco finds his receivers and tight ends and brings back the Ravens to 5 points (28-23) of Bengals since the men of John Harbaugh miss a conversion to 2 points. The Bengals are a little ahead with a field gold (31-23) taking care to use the stopwatch to their advantage. It will pay off because, on the drive of the last chance of the Ravens, Shawn Williams causes a fumble of Javorius Allen who ensures the victory of the Bengals.