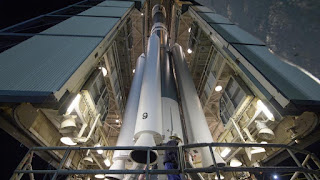 The ICESat-2 satellite will monitor changes in the cryosphere by emitting a laser.

The satellite with the most advanced space laser from NASA was launched on Saturday on a mission to measure the loss of ice on Earth and improve forecasts on the rise in sea level due to global warming.

NASA’s ICESat-2 satellite (Ice, Cloud, and Land Elevation Satellite 2), which will orbit the Earth from pole to pole to calculate ice heights along the same route, is about to take off. From the Vandenberg air base in California (United States), the US space agency will launch the satellite aboard a Delta II rocket from the United Launch Alliance.

Wrapped in the darkness before dawn, the ICESat-2, a half-ton and worth $ 1 billion, was launched aboard a Delta II rocket from the Vandenberg Air Force Base in California at 6:02 am (1H02) GMT).

“Three, two one, take off!” Said the launch commentator in the NASA broadcast.

“The ICESat-2 is taking off on a mission to explore the ever-changing polar ice caps of our planet,” he added. NASA launched the Delta II carrier rocket of the United Launch Alliance on Saturday morning, which will put the ICESat-2 satellite into orbit.

The rocket has taken off from the launch center of Vandenberg Air Base in California, USA.

ICESat-2 incorporates a laser instrument with which Nasa will analyze with high precision the changes in the mass of polar ice on Earth. The advanced topographic laser altimeter (ATLAS) system measures height based on the time it takes for light photons to travel from the spacecraft to Earth and back. Thus, ATLAS will shoot 10,000 times per second, sending hundreds of trillions of photons to the polar surface.

The launch marks the end of almost a decade without NASA having an instrument in orbit to measure the surface of the ice sheet around the world. The ICESat-2 is a satellite whose mission will be to measure the annual changing height of the frozen and frozen areas of the surface of our planet, through the emission of a laser.

This instrument will provide scientists with the possibility of understanding the factors that drive changes in the cryosphere, frozen areas, and frost. The main thruster of the Delta II has broken off as planned, and the second stage of the rocket continued its journey.

As it orbits the Earth from pole to pole, the new satellite will calculate the ice heights along the same itinerary in the polar regions four times a year, which will provide seasonal and annual control of changes in the surface.

But beyond the poles, NASA may know the height of ocean and land surfaces s, ice caps, glaciers, sea ice and vegetation, thanks to the coverage by ICESat-2. In this way, the mission allows unprecedented monitoring of the changes in the land and in the polar ice mass, at an incomparable level of detail.

The previous mission, ICESat, was launched in 2003 and completed its work in 2009.

Considered “exceptionally important to science,” the new mission will help improve forecasts of sea level rise, according to Richard Slonaker, ICESat-2 program executive. The satellite should reveal unprecedented details about the current thickness of ice in the polar regions, vulnerable to global warming.
The measurements will be “extremely accurate,” with a margin of error less than the width of a pencil, said Kelly Brunt, a member of the team.

The previous mission, the ICESat, allowed the scientists to know that the ice sheet was thinning and that the ice was disappearing from the coastal areas of Antarctica and Greenland.

In this nine-year period, an airplane mission, called Operation IceBridge, has flown over the Arctic and Antarctic “taking height measurements and documenting the change in the ice,” NASA said. But an update is urgently needed. The dependence of humanity on fossil fuels as a source of energy means that the accumulation of gases that produce global warming will continue.

The average global temperature is growing: four of the hottest years in modern times have been recorded between 2014 and 2017. This warming causes the ice sheet to be reduced in the Arctic and Greenland, and in turn raising the sea level, a threat to hundreds of millions of people living on the coasts.

“We will be able to see specifically how the ice is changing over the course of a single year,” said Tom Wagner, a scientist at the cryosphere program at NASA.

Although powerful, the laser will not be hot enough to melt ice from its observation point about 500 kilometers above Earth, NASA said.

The new laser will fire 10,000 times in a second, compared to the original ICESat that fired 40 shots.

The result is a much higher degree of detail, similar to taking 130 images from a single football field, versus what it would be to take a picture of each goal post.

The measurements will be taken every 0.7 meters along the satellite path.

“One of the things we are trying to do is to characterize the change that is happening on the ice, and this is going to greatly improve our understanding, especially in areas where we do not know the dimension of the change at this time,” Wagner explained, mentioning the deep interior of Antarctica as one of those uncertain areas.

The mission must last three years, but it has enough fuel to continue for 10 years if the heads of the mission decided to extend its duration.

The Apollo 8 a Christmas gift of technology

Why Vitaminwater wants you to trash your smartphone?