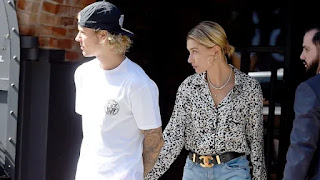 “I’m not married yet!” Was the message from model Hailey Baldwin to deny on Twitter the rumors about her wedding with Justin Bieber.

The path to the altar of Justin Bieber and Hailey Baldwin continues to advance step by step. Last July the singer confirmed that there would be a wedding, and in August the couple already bought a millionaire mansion as a love nest. This Thursday they would have taken another step, a big step: to marry before the civil authorities of New York, and only the religious ceremony is pending. People magazine said earlier Friday that the singer, 24, and the model, 21, got married on Thursday in New York City. “They did it and they did not listen to anyone’s objections,” a source close to the couple told the publication.

However, the message of the model suggests that the wedding could arrive in the coming weeks. According to TMZ, Bieber and Baldwin will get married next week, possibly outside the country, and in a small ceremony.

The relationship between the two has been built for years. They met in preadolescence and have always had a special bond. And Bieber proposed to Hailey just a few weeks after they had resumed their love affair. The couple had had an affair from 2015 until 2016.

According to media such as People and TMZ, Bieber and Baldwin went before a judge in New York on Thursday to get married, without guests or relatives. People, citing sources from the couple’s surroundings, assure that they are already husband and wife, although they have planned a religious ceremony to which they will invite friends and family.

I understand where the speculation is coming from, but I’m not married yet! – Hailey Baldwin (@haileybaldwin) September 14, 2018

“Justin has been in love with her for a long time, so this did not come suddenly,” said a source close to the artist, who added that even when he was dating Selena Gomez, the singer was still thinking about Hailey.

“I am so in love with everything that is on you, so committed to spending my life knowing every part of you that I love you with patience and kindness, I promise to lead our family with honor and integrity by allowing Jesus through his Holy Spirit guide us in everything we do and in every decision we make, my heart is COMPLETE and FULLY YOUR, and I will always put you first! “, wrote the teen idol in his Instagram account to his new bride in July.

Who is the young woman who conquered Justin Bieber

Sensual and religious, the model stole the pop artist’s heart. Hailey Baldwin dazzles on the catwalks and since she was a child she dreamed of getting married and forming her own family.

She is 21 years old and the daughter of actor Stephen Baldwin and Kennya Deodato Baldwin. Her uncle is Alec Baldwin and is the granddaughter of Brazilian musician Eumir Deodato.

The model is a true “it girl” of social networks thanks to its impeccable urban style and publishing images of its fabulous lifestyle. Today accumulates more than 13.4 followers on Instagram. In 2015 she made her debut at New York Fashion Week, marching for Tommy Hilfiger and since then her career took off becoming one of the most sought-after models.

The couple was captured on Thursday by TMZ entering one of the courts where marriages are held and marriage licenses are issued. According to the website, Bieber told Baldwin upon entering the courthouse: “I can not wait to marry you, baby.” After the ceremony, the singer thanked one of the officials: “Thank you for keeping it a secret.” Now we just need to know the date of the expected religious wedding. According to a source consulted by People, it will be “a great ceremony, before God and with all his loved ones.”