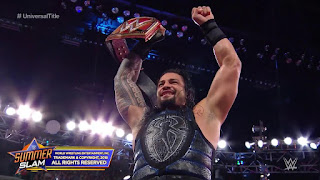 The rematch of Roman Reigns against Brock Lesnar arrived in the WWE SummerSlam 2018 that took place at the Barclays Center in Brooklyn in New York.

WWE SummerSlam 2018 was held at the Barclays Center in Brooklyn, New York. In the stellar fight of the night, Roman Reigns was consecrated as the new Universal Champion, after defeating in a magnificent fight to Brock Lesnar.

A great lever to the wrist of Alexa Bliss by Ronda Rousey gave the title to the latter for the delirium of the attendants to the spectacular evening. Rousey made his opponent surrender.

But Brock Lesnar was pretty clever: during the match, he attacks Braun Strowman, carries him an F5 and the wheel of chair blows so that he is no longer able to fight after. He throws the briefcase off to ensure a little more security.

No luck for Lesnar, who let himself be a little too distracted. Roman Reigns brings him a Spear who will finish the match and give him the victory. Roman Reigns finally beat Brock Lesnar and became Universal Champion.

Shinsuke Nakamura retained his belt of the United States, after beating Jeff Hardy, who lost by a failed attack. The Japanese took advantage of this so that the count reaches three and stay with the victory.

Meanwhile, in another of the expected matches of the evening in New York, The Miz beat Daniel Bryan, after attacking the latter with a mitten that Maryse gave him.

Bryan was knocked out and the score reached three.

A triple threat fight for the WWE RAW women’s title in WWE SummerSlam 2018 ended with an impressive triumph of Charlotte Flair over Carmella, the then champion, and Becky Lynch. During the celebration, the redhead attacked the new champion.

What looked like a promising fight between Brau Strowman and Kevin Owens at WWE SummerSlam 2018 ended in an unfortunate way for the Canadian. And is that despite the stipulation that if KO won the fight would be the case of “Money in the Bank” that was owned by Strowman, there was no way to achieve it. The “Monster among men” quickly gave an account of his rival with a brutal punishment.

The titular fight for the championship in pairs of SmackDown! between the current champions of “The New Day” and “The Bludgeon Brothers” in WWE SummerSlam 2018 ended with the victory of the first. This due to a disqualification, because Rowan entered with a mallet and finished with his rivals.