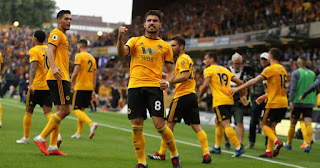 Manchester City tied for the third time in the Premier League as a visitor. He was 1-1 against Wolverhampton and Kun Agüero had his right foot on the triumph in the last play of the game: a free kick that hit the crossbar prevented him from leaving with there.

The cast of Midlands is back in the English Premier League after having won comfortably the English Championship and now they are determined to stay for a long time in the top flight of English football.

Unfortunately the start for those led by the Portuguese Nuno Espiritu Santo has not been the best, so first at home they had to settle for a draw with two goals, in a draw that for many has taste of defeat, as it was at home and the visit played from the minute 40 of the first half with a player less and despite that he had to suffer until the 80th minute to get the equalizer.

Then came the visit to Leicester City and although the shown on the field was interesting, in the end the three points were for the homeowner with a score of 2-0, so this Saturday they want to recover and surprise a victory and for it the Portuguese coach bet to what it can do in the offensive, with players of the stature of Raúl Jiménez and Rubén Neves.

As shown in its first three official games of the season, those led by Spanish Pep Guardiola are candidates to get a new English Premier League title.

Recall that city dwellers have been the first team to win the title of Premier adding 100 points since the competition has twenty teams and it seems that they will re peat the story.

So Manchester City started winning the Community Shield by defeating Chelsea 2-0, and then repeated the story in their two Premier League games, first winning 0-2 on their visit to Arsenal and now last in the Etihad Stadium come to thumping 6-1 at Huddersfield Town with an excellent performance by Argentine striker Sergio Agüero who scored a hat-trick. And this Saturday he is determined to add his fourth consecutive victory in official games.