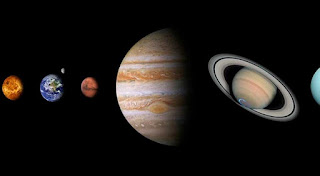 A group of scientists from Harvard University has shown that it is likely that the size of exoplanets, which are between two and four times the size of the Earth, is due to the fact that water is its main component. This finding would be an important step in the search for life beyond the Solar System as it augurs well for the possible formation of Earth-like planets with water.

This finding is important because, although water has previously been implicit in individual exoplanets, this work concludes that water-rich planets are common.

This work, which will be presented at the Goldschmidt conference in Boston, is a further step in the study of exoplanets, discovered in 1992 and which aroused interest in understanding their composition to determine, among other things, if they are suitable for the development of life.

Professor Sara Seager, a planetary scientist at the Massachusetts Institute of Technology and deputy science director of the mission, said, “It’s amazing to think that the enigmatic medium-sized exoplanets could be water worlds with large amounts of water.

Now, a new evaluation of the data of the exoplanets by the Kepler Space Telescope and the Gaia mission indicates that many of the known planets could contain up to 50% of water, which is much more than 0.02% of the content of water on Earth.

“It was a great surprise to realize that there must be a large number of aquatic worlds,” said Harvard University Senior Researcher Dr. Li Zeng.
Scientists realized that many of the 4,000 confirmed exoplanets or candidates that have been discovered so far can be divided into two categories: those with an average planetary radius of 1.5 with respect to the Earth and those that measure on average 2.5 times the radius of the Earth.

In this sense, a group of international scientists has developed a model of their internal structure after analyzing the exoplanets through measurements of the Gaia satellite of its mass and its radius.

“We have analyzed how mass is related to radium and we have developed a model that could explain the relationship,” Li Zeng explains.

“The model indicates that those exoplanets that have a radius of about 1.5 times the radius of the Earth, tend to be rocky planets (five times the mass of the Earth), while those with a radius of x2.5 the Earth’s radius (with a mass about ten times that of Earth) are probably water worlds, ” continues the doctor.

“This is water, but not a common water like we can find on Earth”

“This is water, but not a common water like we can find on Earth,” says Zeng. ” The surface temperature is expected to be in the range of 200 to 500 degrees Celsius, its surface may be enveloped in an atmosphere dominated by water vapor, with a layer of liquid water underneath.” Going deeper, one would expect to find that This water is transformed into ice due to the high pressure before reaching the solid rocky core. The beauty of the model is that it explains how the composition relates to the known facts about these planets, “the doctor asserted.

Also, the study indicates that about 35% of all known exoplanets that are larger than Earth should be rich in water. Thus, these water worlds were probably formed in a similar way to giant planetary nuclei such as Jupiter, Saturn, Uranus or Neptune, which are found in the Solar System.

The recently launched TESS (Transiting Exoplanet Survey Satellite) mission will find many more exoplanets thanks to terrestrial spectroscopic tracking. The new generation of space telescopes, the so-called James Webb Space Telescope, will be able to characterize the environment of some of the exoplanets, according to Zeng.

In addition, Professor of Planetary Sciences at the Massachusetts Institute of Technology and Deputy Scientific Director of the TESS mission, Sara Seager, explains that it is “incredible” to think that the “enigmatic” exoplanets can contain large amounts of water and that the observations of The atmosphere in the future – of thick vapor atmospheres – can “support or refute the new findings”.