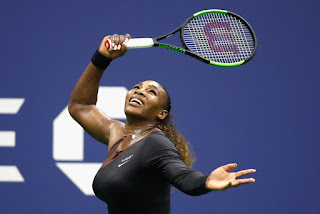 Serena Williams has just been banned from wearing her catsuit at the French Open when the tennis player bounced back at the US Open – and shows up in a very unusual outfit on the court.

Just a few days after the French tennis federation FFT and its president Bernard Giudicelli criticized Serena Williams for her black catsuit at this year’s French Open and announced a dress code for the tournament, the athlete responded with humor: she entered the US Open a tutu on the square.

Ballerina on the court?

For their game against Poland Magda Linette, the 36-year-old appeared in a black asymmetric one-shoulder dress with a tutu on the court. The outfit was designed specifically for Serena Williams by Virgil Abloh in cooperation with sports manufacturer Nike. The Louis Vuitton designer is good friends with the tennis pro. On Instagram, he commented on a picture of Serena Williams in the tutu: “I’m ready to design clothes for her all my life.”

Serena Williams (36) had recently sparked a controversial discussion. At the French Open, the tennis player with a black bodysuit had been on the court, which she had selected for medical reasons. The 36-year-old had violated the usual dress code of a shirt and short skirt. Association leader Bernard Guidicelli had then declared to want to ban such an outfit for the French tournament and introduce a dress code. Almost as if defiance Serena had again an extraordinary outfit!

Without question, with her look Serena Williams made a statement: The tutu, although it appears exceptional on the tennis court, is a skirt and thus fully complies with the rules of the tennis court. Nevertheless, after the debate over her catsuit, Serena Williams underlines the French Open with it at the same time that every woman should wear what she wants to wear.

Guidecelli had criticized Serena’s clothes in an interview with a French tennis magazine: “The sport and the place must be respected.” You will not let this happen again. The mother of an eleven-month-old daughter had calmly responded to the harsh words of the functionary at a press conference.

In her outfit, the athlete made the comeback at the US Open after the birth of her little daughter Alexis Olympia Ohanian Jr. At Arthur Asher Stadium in New York City, Serena Williams beat Magda Linette 6-4, 6-0 to qualify for round two.

After her stopover in Europe for the athlete was a match in the US, where, however, there are no such strict rules. Nevertheless, their appearance should be a clear sign against the announced catsuit taboo of those responsible. In the match against the Pole Magda Linette at the US Open in New York Serena appeared in a black dress including tutu skirt and fishnet stockings.

At the French Open she played in the catsuit – at the US Open Serena Williams (36) started on Tuesday as a ballerina and danced in tutu and fishnets her opponent, the Polish Magda Linette (26), with 6: 4 and 6: 0 from Place.

The American, who won against the Polish Magda Linette, showed that she can play and even win dressed as she wants. The tutu that he wore is his own design in collaboration with the designer Virgil Abloh, according to the magazine Vanity Fair. In her statements, Serena Williams defends her position and points out that this suit “represents all mothers who have had a hard pregnancy, have had to return and be 100% in the middle of the storm and have the confidence to be them again same. ”

Serena Williams hits Poland’s Magda Linette in a first-round match on the first day of the US Open tennis tournament. In the 21st century, this is news just like it was when Serena Williams used it for her debut after becoming a mom at this year’s Roland-Garros.