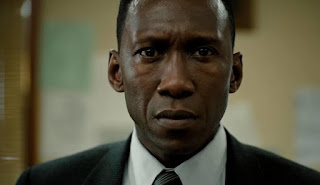 January is going to be really dark – at least when it comes to the creators of “True Detective”. Because HBO announced now that fans of the sinister series can look forward to Season 3 in early 2019 and delivered the first trailer directly.

It was a long uncertainty that the series would be continued: the storyline in season 2 was too complicated, which gave the creators a lot of criticism.

Oscar winner Mahershala Ali ( “House of Cards”, Moonlight ) plays in the third season of the State Police Detective Wayne Hays from northwestern Arkansas, which determines the case of two missing children. Unlike the first seasons, he is the sole investigator in focus. Carmen Ejogo ( Selma ) plays Amelia Reardon, a teacher with connections to the two children. Stephen Dorff ( Blade ) plays another investigator whose career was influenced by a startling crime. Ray Fisher ( Justice League ) will be seen as Hays’ son Freddy. Scott McNairy( Killing Them Softly ) plays Tom, the father of the vanished children, whose fate will be linked to that of the investigators for over ten years. Meryl Streep’s daughter Mamie Gummer ( Side Effects ) portrays Lucy Purcell, a mother of two children, implicated in the world of crime.

What is “True Detective” Season 3 about?

It goes – of course – back to crimes that are to be enlightened. Detective Wayne Hays, together with his partner Roland West, is to investigate the murder of two children who have disappeared in the so-called Ozarks. The Ozark Plateau is a highland region in the heart of the US, located in Missouri and adjacent to the state of Arkansas. Investigations have been employing the detectives for three decades.

A small damper in my anticipation came when it became known that Jeremy Saulnier ( Blue Ruin, Green Room ) has left the season as a director. Originally, he was supposed to stage all eight episodes, as did Cary Fukunaga on season one, which made the debut team look like one piece.

After two episodes, however, Saulnier got out. As a result, date conflicts were stated, but according to various reports, there were tensions between him and Pizzolatto. The directing of the remaining episodes was shared by Daniel Sackheim ( “The Americans”) and Nic Pizzolatto himself. The second season suffered among others, the episodes of several different directors were staged and it would have been really interesting to see an entire season of Saulnier, whose recent films I found remarkable.

Who’s in the new season of “True Detective”?

The lead role will be taken by Mahershala Ali, who won the Oscar for his role in “Moonlight” and also starred in the series “House of Cards”. As a sidekick, Stephen Dorff was hired, who had his most famous role in the movie “Blade”. Among other things, including Carmen Ejogo, who, among other things, in “Fantastic Beasts and where they are to find” has played or the crime-experienced Josh Hopkins (“Cold Case” or “Bones – the bone hunter”).

But even so, I am looking forward to the return of “True Detective”. The second season was weaker than the first, but definitely not so weak to destroy my interest in the series and Pizzolatto’s vision. Mahershala Ali is a great actor who could follow up on the unforgettable performances of Harrelson and McConaughey from season one, and the first teaser presses just the right buttons to rejoice in anticipation of the series.

What has been the reaction to the announcement of Season 3?

On Twitter, fans of the series responded to Season 3 news. After the second season created confusion, many are looking forward to the re-launch of “True Detective” and, above all, to the acting performance of lead actor Mahershala Ali.

The new episode will be about a macabre crime in the heart of the Ozark Plateau in the Midwest, where two children disappeared. An associated mystery gains in depth over three decades. Ali personifies Wayne Hays, a state police detective from northwest Arkansas. Stephen Dorff portrays Hayes colleague Roland West. Carmen Ejogo plays the teacher Amelia Reardon, who was in a relationship with the two missing children.
Josh Hopkins is Jim Dobkins, an attorney involved with the police in a lawsuit. Scoot McNairy portrays the father of one of the two missing children, Tom. Mummy GummerAs a mother of two, Lucy Purcell is also at the center of the case. Jodi Balfour, Lonnie Chavis, Ray Fisher, Michael Greyeyes, Jon Tenney, Rhys Wakefield, Sarah Gadon, Emily Nelson, Brandon Flynn and Michael Graziadei play further roles in the eight episodes.
Directed by Jeremy Saulnier ( “Green Room” ) and also series creator Nic Pizzolatto will take place for the first time in the director’s chair. Pizzolatto is also largely the sole author of the scripts, except for Episode 4, which he co-authored with David Milch