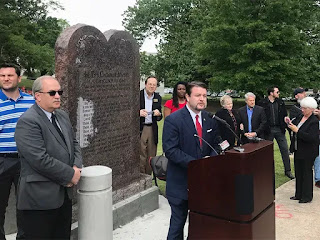 The Satanic Temple brought a statue of Baphomet to the Arkansas Capitol on Thursday to protest a law that allows a monument representing the Ten Commandments in front of the state building.

Amendment I. Congress shall make no law respecting an establishment of religion, or prohibiting the free exercise thereof; or abridging the freedom of speech, or of the press, or the right of the people peacefully to assemble and to petition the government for a redress of grievances.

Hundreds of protesters gathered around the Arkansas State Capitol Thursday as the Satanic Temple wheeled in an 8.5-foot Baphomet statue on the lawn in protest of a 2015 law that allows religious monuments on state ground.

The statue of Satan unveils Baphomet statue at Arkansas Capitol