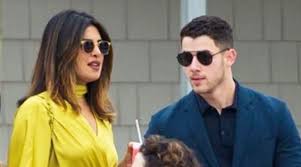 36-year-old Indian actress Priyanka Chopra and 25-year-old musician Nick Jonas officially became a bride and groom today. A colorful engagement ceremony was held in one of the temples of Mumbai.

The ring from Tiffany Nick Jonas presented to Priyanka Chopra a month ago – on July 18, on her birthday, Priyanka answered her lover: “Yes.” However, despite the brilliant size of the diamond, which simply could not be hidden from the paparazzi, the official statements to this day, the couple did not. The reason for this were family traditions, which Priyanka wanted to keep.

The night before, the families of the bride and groom had first met at dinner: Nick’s parents had specially arrived in Mumbai to get acquainted with Priyanka’s relatives, as required by custom. The next morning Chopra and Jonas took part in the Roka ceremony, an event that preceded the big wedding.

Following traditions, Priyanka appeared in a yellow sari, embroidered with stones. Nick was wearing a white sherwani suit for official events in India. After passing the ceremony and having received the blessing of their parents, the lovers hastened to share the joyful news in social networks.

Touchingly signed a picture of Nick with Priyanka. The same appeared in her Instagram:

I accept … With all my heart and soul, –  wrote Priyanka.