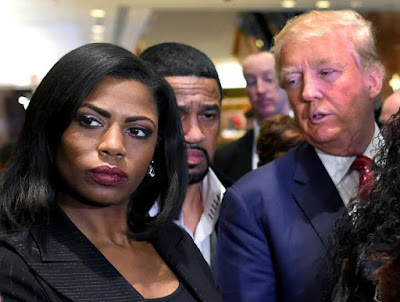 Former White House adviser Omarosa Manigault Newman on Thursday released a recording that Donald Trump’s reelection campaign offered her a job after she was fired from the US government.

According to Manigault Newman, that position was an attempt by the environment of the president of the United States, Donald Trump, to “buy” his silence.

The film is a new episode in the confrontation between Trump and his former adviser, unleashed in recent days as a result of the publication of a controversial book about his time in the White House and a recording of the president.

This new audio, facilitated to the MSNBC chain, gathers a conversation between Manigault Newman and Lara Trump, wife of one of the children of the New York mogul and member of his electoral campaign.

According to the former adviser, the recording took place a few days after her dismissal and shows how Trump’s environment tried to “buy” her silence by offering her a salary of $ 15,000 a month, similar to what she had in the US administration. Speaking to MSNBC, Manigault Newman reiterated that he saw “corruption” during his tenure at the White House and hinted that he has more recordings to defend against possible attacks.

In response, Lara Trump has issued a statement in which he said he offered that job to Manigault Newman for the good personal relationship he had with her and before knowing the “serious violations of ethics and integrity” that he committed in the White House and that supposedly cost him the job.  The daughter-in-law of Trump described the recording of “fraud” and was “saddened” by the “betrayal” of the former collaborator. “I hope this is worth it for you, Omarosa because some things cannot be priced,” concluded Lara Trump.

This week, the Trump election campaign team filed an arbitration proceeding against Manigault Newman, accusing him of violating a confidentiality agreement signed before the election.

After the publication of his book “Unhinged” (Deranged), in which he narrates his period within the US Government, Manigault Newman has been repeated object of attacks by the president.