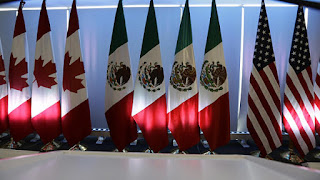 The US and Mexico agree on a new edition of Nafta, free trade between the two countries, including Canada. The US and Mexico have agreed to a new Nafta agreement, according to both countries. US President Donald Trump spoke in Washington on Monday about a “very good” deal with Mexico. It has special significance for industry and agriculture.

Us President Donald Trump, when he took office in January 2017, announced that he would gradually terminate all relevant international trade agreements in which the United States holds a stake. They were all to the detriment of “America,” the billionaire had said. He had called the North American Free Trade Agreement (NAFTA) between the US, Canada and Mexico, now almost 24 years old, a “catastrophe”.

Mexican President Enrique Peña Nieto said the final talks with Canada on the trilateral agreement could be finalized “this week”.

Donald Trump wants a new name for the deal

The previous name Nafta should disappear, emphasized Trump. As a next step, he will call the Canadian Prime Minister. A senior US official said the Canadian foreign minister is expected to speak in Washington shortly. There is hope that an agreement can be reached with Canada by Friday.

Nafta stands for North American Free Trade Agreement. It was founded on 1 January 1994 by the three member states Canada, USA, and Mexico. The aim was to abolish tariffs between the three member countries and to create a cross-border free trade area. Nafta was the successor to a pre-existing free trade agreement between Canada and the United States.