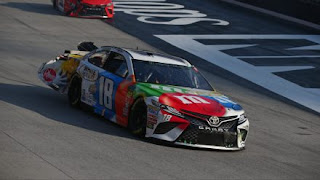 In the US, the next stage of the national racing series NASCAR Cup, which was held in Bristol, ended. The race was won by Ford’s pilot Kurt Busch, and along with him in the top 3 included the Chevrolet driver Kyle Larson and his team-mate Chase Elliott. The best representative of the “Toyota” at the finish was the driver Eric Jones, who saw the checkered flag in the fifth position in the race.

The crew of the Russian team G-Drive Racing under the leadership of Russian Roman Rusinov and the French Andrea Pizzitola and Jean-Eric Verny won the fourth stage of the European Le Mans Series (ELMS) in the UK.

The crew at number 26 overcame the distance race “4 hours of Silverstone” ahead of the nearest pursuer on one lap.

The crew of the SMP Racing team as part of the Russians Victor Shaytar and Matevos Isahakyan could not finish.

Earlier, Sergei Sirotkin said that the “Sauber” is unattainable for the “Williams” in the current season of “Formula 1”.