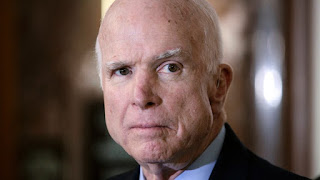 Republican John McCain is one of the harshest critics of US President Donald Trump. The cancer-afflicted Senator has now decided, according to his family, not to continue a tumor treatment.

When US President Donald Trump met with Kremlin chief Vladimir Putin in Helsinki in July, it was John McCain who warned most clearly before the memorable encounter, “Putin is our enemy, ” McCain said. How long he will be reminders in Washington is unclear. The Republican senator is fighting a life-threatening brain tumor.

Now, according to his family, the 81-year-old has decided not to continue the treatment. “The progress of the disease and the relentlessness of aging have made their judgment,” said McCain’s family. “With his usual willpower,” he decided to quit chemotherapy. “John has already surpassed the expectations of his survival,” it said.

McCain was diagnosed with an aggressive brain tumor last year. For the past few months, McCain has not been in the Senate, to which he has been a member for more than three decades. Instead, he stopped for cancer therapy at his home in the state of Arizona.

It was not the first time the Republican was diagnosed with cancer. In the 1990s and 2000s, several melanomas were removed – a malignant form of skin cancer.

Wife and daughter thank for the support

“I love my husband wholeheartedly, God bless anyone who took care of my husband during his trip,” said McCain’s wife Cindy. His daughter Meghan also thanked the public for their support. “My family is deeply grateful for all the love and generosity you showed us over the past year,” she wrote via Twitter.

In addition, many US politicians expressed sympathy and appreciation for McCain. Former Republican presidential candidate Mitt Romney said: No one personifies “honor, patriotism, service, and sacrifice” better than McCain. He added, “His heroism is inspiring, his life shapes our character.”

Democratic Congressman Joe Kennedy III described McCain as a “warrior in the truest sense of the word”. All thoughts are with “an inspiring man and a loving family”.

In September 2017, the senator said that doctors give him a very poor prognosis in the fight against a brain tumor. In July of the same year it became known that 80-year-old at the time, McCain removed a blood clot over his left eye. The tissue analysis performed after this procedure showed that it is a question of glioblastoma – the most aggressive form of the brain tumor.

McCain does not want Trump at his funeral

US President Donald Trump has not spoken up so far. The relationship between Trump and McCain has been shattered for a long time. During the presidential campaign, Trump had mocked the Vietnam veteran, who had been tortured in captivity of the Viet Cong. For him, McCain was “not a hero,” said Trump, who himself had once bypassed the military service. “I like people who were not caught, okay?”

McCain, who sits in the US Senate since 1987, said he does not want Trump to attend his funeral. Instead, he wishes his Vice Mike Pence as a representative of the White House at the funeral.