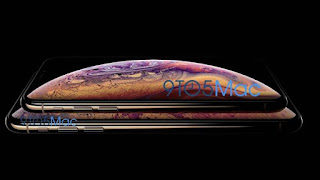 Apple has confirmed the date of the iPhone keynote on September 12 and has released the first images of iPhone Xs and Apple Watch 4 to the public.

Apple’s next keynote will be on September 12, as the company has since confirmed. The invitations to the press event sent on Thursday evening show a picture of the circular headquarters Apple Park from the aerial view, conspicuously held in gold and subtitled with the text “Gather round” (roughly “gather in a circle”).

Apple has apparently inadvertently allowed public access to recordings of the yet unpublished products for a short time and thus revealed first pictures of “iPhone Xs” and Apple Watch Series 4: The iPhone X successor models will both be called simply iPhone Xs, like 9to5Mac reported that has published the pictures without giving more details on the origin. Both the version with 5.8 “display and the expected larger 6.5” iPhone will carry the new Xs name, it is said to renounce the previous additional designation “Plus” for the larger model Apple.

The two new OLED iPhones to be seen in the side view will offer Apple for the first time therefore also in a gold color execution.

The report suggests that the larger of the two devices will not carry the name iPhone XS Plus. According to a Bloomberg report, Apple had recently considered canceling the name. This would be both variants of the new iPhone simply called iPhone XS.
The new iPhone generation will differ primarily from the higher performance of the current iPhone X. Even with the camera, there should be improvements. The design is essentially retained, and the Notch continues to exist. The devices are still unlocked by face recognition Face ID, the home button does not come back. Even a fingerprint sensor in the display is not expected.
Obviously, the manufacturer had already prepared a golden iPhone X, but for unknown reasons, it had not yet put it on the market.
Furthermore, 9to5Mac wants to have the official name of the device in experience: The new iPhone will therefore actually called iPhone XS. The spelling remains open; iPhone XS or iPhone Xs are also possible. It has long been considered certain that Apple will introduce two iPhone X successors with the OLED display, one of which retains the size of the iPhone X, while the second device is significantly larger and receives a 6.5-inch display.

In this way, Apple also leaked a first view of the Apple Watch Series 4, as also noted 9to5Mac.The photo indicates minor changes to the right side of the case, including a new opening whose function is still unknown. The display of the Apple Watch 4 also seems to extend closer to the edges of the case and so fall out accordingly larger, without the entire clock to grow noticeably.

iPhone Xs and iPhone 9: 3 models expected for the Apple event

While on older invitations hints at possible products or features could be guessed at the invitation to the September event, only a bronze or gold circle, which reminds of Apple’s new campus Apple Park, can be seen. Among them is next to the venue – the Steve Jobs Theater – the terse sentence “Gather round” written.
The picture also shows a completely new clock face for watchOS with at least eight complications – small additional information such as weather data that can be configured by the user – as well as a number of eye-catching round elements.

In addition to the two iPhone Xs models and the Apple Watch Series, 4 is also expected the introduction of a slightly cheaper and colorful 6.1 “iPhone. In addition, Apple seems to prepare another variant of the iPhone 7, whether it is just a cheaper produced version for certain markets or a new model, remains open for now.

iPhone Xs is coming: Apple is inviting to the event on September 12, 2018

The date is set: The iPhone Xs comes on September 12 – Apple sent invitations to the special event on Thursday. The Qi charging mat AirPower and new AirPods could introduce the Group on 12 September. The special event will take place at the Steve Jobs Theater, Mac & I will be accompanying the event with a live ticker and extensive coverage.
As part of the fall event in Cupertino, California, Apple is very likely to reveal three different iPhone models, which will be based on the design on the 2017 iPhone-X. The home button disappears completely, instead of all Apple’s 3D Face Recognition get Face ID. How the devices will look is already as good as clear:

Apart from the iPhones, of which probably two models are to be christened iPhone Xs, respectively iPhone Xs Plus and an iPhone 9, Apple could also reveal an update of the Apple Watch,which should receive a larger display. Whether on 12 September also an upgrade of the iPad Pro with Face-ID in two sizes will be presented, remains to be seen.

Apple will broadcast the event as in the past year in a live stream, so that not only the invited press can attend the event. Incidentally, the Apple event was also held on 12th September last year.