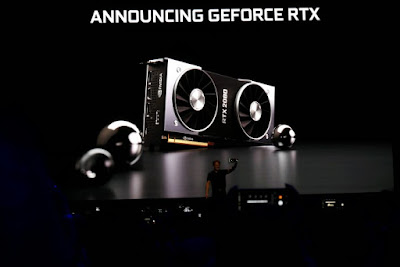 Nvidia has introduced new gamer graphics cards. They are said to be particularly efficient at ray tracing calculations but are much more expensive than their predecessors.

Nvidia has introduced the first graphics cards of its new gaming generation. The two high-end models GeForce RTX 2080 and GeForce RTX 2080 Ti are powered by graphics chips of the new Turing series with 2944 and 4352 shader cores (Ti). Their 3D performance is to surpass the predecessor generation Pascal (GeForce GTX 1000) and sufficient to display current DirectX 12 games in 4K smoothly. According to the Nvidia website, the GeForce GTX 2080 costs 850 euros, while Nvidia charges 1260 euros for the GeForce RTX 2080 Ti. With it, the GPU manufacturer screwed up again the prices for player graphics cards. There is also a “cheaper” version called GeForce RTX 2070 for 640 euros. The tickets should be available from 20 September.

To reduce the load on the GPU, hybrid rendering technology is used – geometric models are processed by rasterization, and by using ray tracing only soft shadows and reflections are calculated. During the presentation, the work of RTX algorithms in games such as Shadow of the Tomb Raider, Metro: Exodus, Assetto Corsa Competizione and Battlefield V was demonstrated.

The RT cores in the TU10 GPUs accelerate certain algorithms, making real-time day teaching fluid for some effects: Nvidia showed a demo of Battlefield 5, with an explosion occurring behind a tank still reflected in the car next to it. With previous raster technology that does not work in this form, since the flames are outside the screen space. In Shadow of the Tomb Raider, Nvidia demonstrated soft shadows thrown by point lights that are simply not available without the RTX option.