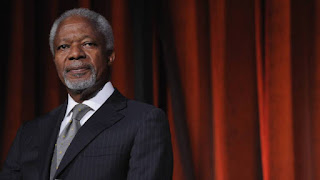 Born in Ghana in 1938, Annan has died in Bern after a brief illness

Kofi Annan, Nobel Peace Prize Laureate and former Secretary General of the United Nations, has died in Switzerland at the age of 80, according to his family.”With great sadness the Annan family and its Foundation announce that Kofi Annan, former Secretary General of the United Nations and Nobel Peace laureate, has died peacefully after a short illness,” the Foundation announced in a statement. The world of global diplomacy has just lost one of its most relevant and elegant figures. Kofi Annan, the seventh secretary-general of the United Nations, has died this Saturday in Bern (Switzerland) after suffering a brief illness. He was 80 years old. Annan was hospitalized in Geneva and then flown to a medical center in the capital, Bern, where he died. The news of his death has also been transferred by the official Twitter account of the International Organization for Migration and by Kofi Annan’s own profile where the family has published an emotional letter.

The Ghanaian diplomat fell ill when he returned from South Africa after attending the commemoration of the anniversary of the birth of the South African leader Nelson Mandela. Annan was hospitalized in Geneva and was later flown to a medical center in the capital, Bern, where he died. During his tenure, he managed to raise a purely administrative position in height thanks to his personality, charisma, determination, and temperament. The legacy left is huge in the field of development. But his 10 years at the head of the multilateral organization were also dominated by dark moments. He family foundation announced his death on Saturday on Twitter. He did not indicate the disease. He merely explains that his state of health deteriorated rapidly upon returning from South Africa, where he participated in the commemoration of Nelson Mandela’s birthday.

His wife Nane and his children Ama, Kojo and Nina were with him during the last days of his illness. The diplomat, born in Kumasi (Ghana) in 1938, had humble beginnings but managed to reach the command of the General Secretariat of the UN, where he served two terms (1997-2006). He also won the Nobel Peace Prize in 2001, shared with the UN for “his work for a better organized and more peaceful world”.During his years at the head of the UN, Annan always distinguished himself by his struggle for peace and the defense of Human Rights.

After leaving office, the diplomat continued to work for peace from the Foundation that bears his name. Of Ghanaian descent, Annan was always engaged in the fight against racism and was involved in numerous initiatives to increase development in the African continent. Kofi Annan, born in Kumasi (Ghana), headed the UN from January 1997 to December 2006. In 2001, right in the middle of his double mandate, he was awarded the Nobel Peace Prize for his work at the head of the institution to achieve a better organized and more peaceful world.

In this sense, one of his last interventions on the international scene occurred last May when he disseminated a controversial message, through his Twitter account, of support for reconciliation in the Basque Country after the dissolution of ETA. “The conflict is rarely solved only through the armed forces,” he said in a tweet that was interpreted as an attempt to downplay the action of the State Security Corps.

Emotive reactions posted for the creator of SpongeBob

Cancer took the life of Yulia Volchkova at her 44