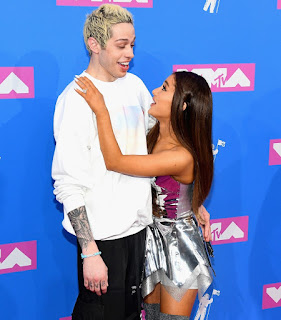 Ariana Grande and Pete Davidson performed together for the first time on a red carpet, at the 2018 delivery of the VMA’s. While parading in front of the press there was a detail that could indicate the couple already married.

Ariana Grande and Pete Davidson have not hesitated, even for a second, in making public their declarations of love: from matching tattoos to the song that Ari dedicated to Pete in Sweetener (2018). Now, during the Sweetener Sessions that Ariana offered last night for her fans, the couple was super caramel. It does not surprise us, at all, that the couple debuted the way they did during the MTV Video Music Awards 2018, holding hands and kissing each time they had (even Pete wore a bracelet with the initials of Ari), but After the awards, Ariana Grande gave a private concert for her fans, as part of her Sweetener Sessions .

Davidson wore a blue bracelet with the letters “AGD”, which according to the speculations of some users on the Internet and other media such as The Hollywood Reporter, maybe the initials Ariana married Ariana Grande Davidson. While no statement has been made about it, the couple was quite enamored while walking inside the Radio City Music Hall. In fact, inside the compound, Pete approached the singer to tell him something in secret and social networks did not lose sight of him.

In case you did not know, these sessions are a series of private concerts that Ariana Grande is offering to her fans in cities like New York, Chicago, and Los Angeles and, during the session last night, everything was super memorable, not only for the incredible voice of Ariana, it was also a love party between her and Pete Davidson.

At one point in the night, Ariana Grande did not resist anymore and called her fiance on stage to have a quick session, while the fans were going crazy with the couple in front of them. Of course, as I could not miss, Ariana Grande played Pete Davidson, the song in Sweetener that Ari dedicated to her future husband. We die of love!

Ariana attended as one of the great nominees, including the video category of the year, for the single “No Tears Left to Cry”, which emerges from her newly released album, Sweetener. The fans shared some of their favorite moments of the night with some clips of the songs that Ariana performed in this edition of Sweetener Sessions, such as raindrops and no tears left to cry